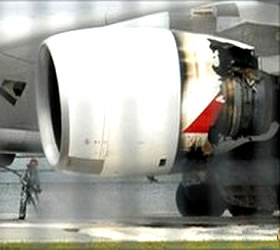 Qantas has begun legal action against the engine supplier Rolls-Royce following the explosion of an engine on one of the airline’s Airbus A380s.It said the legal action was back-up if a settlement could not be reached.Earlier, Australian air safety authorities said they had identified a serious manufacturing fault with some of Rolls-Royce’s Trent 900 engines.Rolls-Royce said the Australian findings were “consistent with what we have said before”.Qantas has resumed flying some of its A380 planes after grounding the fleet for safety checks following the incident on 4 November.The carrier said its legal action allowed it “to keep all options available to the company to recover losses, as a result of the grounding of the A380 fleet and the operational constraints currently imposed on A380 services”.Air safety investigators in Australia said they had identified a serious manufacturing fault with some engines fitted to Airbus A380 passenger jets.

A misaligned component of the Rolls-Royce Trent 900 engine used on a Qantas A380 which exploded last month thinned the wall of an oil pipe.This caused “fatigue cracking”, which prompted leakage and ultimately a fire.Rolls-Royce said in a statement: “We have instituted a regime of inspection, maintenance and removal which has assured safe operation.”This programme has been agreed in collaboration with Airbus, our airline customers and the regulators.”The investigation into the engine explosion was carried out by the Australian Transport Safety Bureau (ATSB).It said: “This condition could lead to an elevated risk of fatigue crack initiation and growth, oil leakage and potential catastrophic engine failure from a resulting oil fire.”The ATSB added that the problem was “understood to be related to the manufacturing process”.And it urged Rolls-Royce to “address the safety issue and take actions necessary to ensure the safety of flight operations in transport aircraft equipped with Rolls-Royce Trent 900 series engines”.Qantas said it would now conduct further engine investigations as a precautionary measure, but stressed that there was “no immediate risk”.

“Qantas currently has two A380 aircraft in operational service, following the grounding of the fleet on 4 November. Both A380 aircraft will be inspected at the Qantas Jet Base in Sydney,” the airline said.The pilots of the November flight made a successful emergency landing in Singapore after one of the engines exploded in mid-air.Singapore Airlines, which also uses A380s with the Rolls-Royce engine, says it is already checking its fleet “on a daily basis”.”The new checks advised by the ATSB will be carried out as quickly as possible,” the airline said in a statement.Qantas flight QF32 experienced an engine failure over western Indonesia, before safely returning to Changi airport. It was carrying 440 passengers and 26 crew.Qantas chief executive Alan Joyce said at the time of the emergency landing that it appeared the blowout was “an engine issue” and not one of maintenance on the two-year-old plane.It was the most serious incident involving the twin-deck A380 superjumbo passenger plane in its three years of service.Not all A380s use Rolls-Royce Trent 900 engines. They are used on 20 aircraft owned by Qantas, Lufthansa and Singapore Airlines.The other A380 aircraft – with Air France and Emirates – use a different engine.The double-decker A380 is the world’s largest passenger airliner, and can carry up to 800 people. The six Qantas A380s each carry about 475 passengers – Bbc