A photographic journey into the Holy Cities 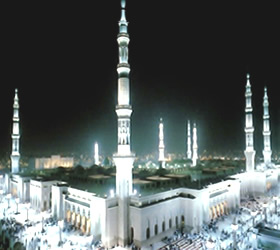 Moving images, striking panoramas, majestic mosques and minarets, special aerial images, intimate scenes of rapturous pilgrims — these are just a few things exhibited at the Photographic Gallery at the American University in Cairo by world renowned and award-wining photographer and film director, Faruk Aksoy.In his photographic exhibition titled, “Mecca and Medina: A Photographic Journey,” he also showcases rare close up moments and a first-of-its-kind showing of 3D photos, which offer a stunning inside look at two sites long considered the most sacred venues for Muslims throughout the centuries.Coinciding with this year’s annual Haj pilgrimage, the exhibition, which opened on Nov. 7 and continues to be on display until Dec. 23, showcases over 40 photographs. According to Shems Friedlander, photographer, award-winning filmmaker and director of the gallery, the exhibit brought over 200 people who wanted to experience the majesty of Makkah and Madinah, even moving quite a few of them to tears.

“Rarely is a collection of such a large number of images of the sacred places of Islam displayed all at one time. The students, faculty and visitors to the gallery were in awe of the event,” noted Friedlander.The experience for many, who had have long yearned to visit these sacred sites, was further enhanced by viewing a few chosen images in 3D. “This 3D technology is going to be used more and more in the coming years. Although it is a known technology after the film Avatar, people are now suddenly more aware and appreciative of it. So, I would like to be one of the pioneers using this technology in the Middle East,” stated Aksoy.

The Turkish photographer and filmmaker has been privileged to have access to Makkah and Madinah for the past 20 years, which has resulted is a collection of hundreds of spectacular images on film of these blessed cities taken from unique angles. “It is probably most difficult to take photographs in Makkah and Madinah, so I feel highly honored to have been able to capture the expansion and ever-changing aspects of these two holy cities,” he added.”It was not my decision to photograph Makkah and Madinah; it was my destiny. Of course, several other matters played an important role in that as well, including my grandfather’s prayer for me when I was five years old in 1957, which is recorded by my father on a tape… basically, my grandfather prayed that I should study, learn about and serve the Prophet (peace be upon him).

He recalled the story of how he ended up in Makkah. “At first, I was not even thinking at all of going to Makkah. Instead, I wanted to go to London in 1980, to study film and photography, so I asked my father to allow me to do so. He was not very happy with this idea and advised me to go to Makkah, as he was a religious person. Then, a friend of mine who knew my father interceded and told my father: ‘Please allow Faruk to come to London first. If Allah wants, Faruk will find himself in Makkah sooner or later.’ Believe it or not, after 13 months, I found myself in Makkah. I was on an assignment with a British film crew from London to go to Saudi Arabia for two weeks.

Those two weeks turned into 29 years, where I spent them mostly filming Makkah and Madinah till this day,” said Aksoy.Born in Istanbul in 1952, Aksoy graduated from Istanbul University and took photography courses in Switzerland. In the 1980s, he was involved with several documentary films in Britain after which he moved to Saudi Arabia. During his long stay in the country, he filmed and directed several projects for companies as well as state institutions. Aksoy has been the cameraman for documentary films including “Inside Makkah” for National Geographic and “The Hajj: The Journey of a Lifetime” for the BBC.

As a cameraman, director and filmmaker, he has been involved with numerous film related projects including documentaries and television commercials as well as feature films. He did documentaries for UK’s Channel 4 and Germany’s SWR. Furthermore, he contributed locally to the Saudi TV series, “Tash Ma Tash,” for two years.His numerous photographic exhibitions include a highly popular exhibit entitled, “Haramain,” which was organized by the IRCICA in Istanbul.

In fact, a selection of his Kaaba photographs are displayed permanently at the Makkah Museum. He has also received several awards including the first prize in 1989 in an international photography contest, “Preserving The Islamic Heritage,” which was also organized by the IRCICA.To further augment his work and share his love of the holy sites, he authored several books, including “The Blessed cities of Islam: Mecca-Medina,” which has been published in six languages, including Russian and Spanish.

As the exhibit’s visitors got a close encounter with scenes of the beloved two cities, many exclaimed with wonder and awe at the creativity and often unusual highlighted angles while they roamed through a riveting panorama, which has long lured Muslims and non Muslims alike. Each had the chance to glimpse and sense firsthand the beauty of the spirituality that the very ground, rocks and even dust of the sites that Prophets since the time of Adam have left their imprints on.

Students at the exhibition’s opening in particular marveled at the photographs’ use of space and the intimacy of the scenes presented. “There is a sense of energy surrounded by vast quiet space. I find the photo very tranquil for its use of negative and positive space,” noted Maya Dukmasova, a journalism student.”These photos are very different from the images we usually see of Makkah and Madinah,” said Farida Shaarawi another student.

“In many of the photos we can see a collection of unique moments and points of view one does not generally get when seeing images of Makkah. For example, in this photo, you are being taken to a specific funeral,” she said, pointing to a photo of a funeral party circumambulating the Kaaba. “This is a highly personal moment not generally captured.”As Aksoy noted, his aim is for the photographs to serve as of a means towards establishing mutual understanding and respect in the crossroads of civilizations that is Cairo.”This is one of the most important cities in the world.

I believe these images will awaken the understanding of religion and will hopefully help each others’ spirituality on this fragile planet we live on,” he said.As the exhibit continues to welcome visitors, one cannot but recall the centuries of faith, decades of tradition, the untold and retold stories and experiences fascination, love and joy of travelers, pilgrims, merchants and travelers on reaching the sacred grounds of these two most beloved places on earth: Makkah the Blessed and Madinah the Radiant – Arabnews