Curtain down on biggest ever Asian Games 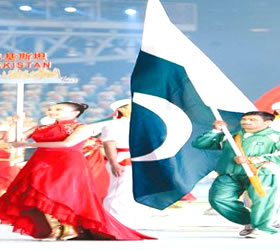 GUANGZHOU (China): The 16th Asian Games officially closed on Saturday in the southern Chinese metropolis of Guangzhou with a rousing and colourful outdoor spectacular.Like the acclaimed curtain-raiser just over two weeks ago, the closing gala was held not inside a stadium but on a boat-shaped island in the middle of the Pearl River, which meanders through the heart of China’s third-largest city.“The 16th Asian Games, which has been a huge success, comes to an end,” said Olympic Council of Asia president Sheikh Ahmed Al Fahad Al Sabah.“This edition of the Games has, without a doubt, been one of the most outstanding in the history of the event.”On a warm night, a volley of red and white fireworks was unleashed from the 610-metre Guangzhou Television Tower to signal the evening’s festivities were underway, as a Games dominated by Chinese athletes neared its climax.

Thousands more fireworks, in green, red, gold and silver, boomed out across the vast city’s hazy skyline.Guangzhou was handing over the Asian Games torch to the South Korean city of Incheon, which will host the four-yearly multi-sports event in 2014.While the November 12 opening ceremony showcased the local Lingnan culture, Saturday’s extravaganza on Haixinsha Island celebrated Asia’s diverse cultures, with music and dance from India, Lebanon, Japan, Kazakhstan and Mongolia.With the multi-coloured television tower peering over and a smattering of skyscrapers as a backdrop, a People’s Liberation Army band and a 1,000-strong choir belted out the Chinese national anthem to a packed grandstand.In front of the crowd opened up a stage with eight huge screens shaped like the sails of a ship, as boats decked out in bright lights and with the names of each of the 45 competing nations or territories drifted up and down the river.Piercing green lasers and roving white beams of light shot up into the night sky as four months of rehearsals and years of planning sprang into action.Much like for the opening ceremony, police undertook a massive security operation that saw roads closed and some shops and businesses shuttered – Nation