Knives being sharpened on eve of Eidul Azha 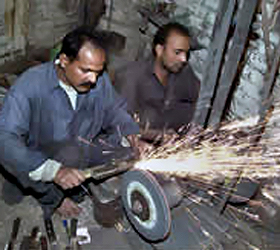 LAHORE: A hustle and bustle was seen at blacksmith workshops, where citizens were getting their knives sharpened for performing sacrifices, while others rushed to markets to purchase sacrificial animals, on Monday.

Taking their knives, meat-cutters and axes to blacksmiths and getting them sharpened is an annual activity. People dealing in the business of sharpening knives, mostly Afghans, were offering their services at people’s doorsteps. They use sharpening rocks or grinders.

People, who are dissatisfied with the services of blacksmiths and knives’ sharpeners, have decided either to sharpen the knives themselves, or at least give final touches themselves. Some others were seen giving instructions to blacksmiths to be extra careful while sharpening their knives.

Butchers seem to be demanding heavy amounts for animal slaughter. They are charging up to Rs 12,000 for cow slaughter and Rs 7,000 for goat and lambs for the first day of Eid. For the second and third day, their charges are slightly less by 30 percent and 50 percent respectively. Ejaz alias Jijji Qasai, a renowed butcher in Gulberg, said that citizens must remain careful as seasonal butchers waste meat by applying the wrong use of meat-cutters. “Cutting out the right shape of meat is an art which is mastered by trained butchers. Seasonal butchers cannot handle this job artfully,” he said.

A lot of people were still visiting animal markets for the final purchase, while an increased activity of transporting animals in vans, pick-ups and even on private vehicles was witnessed on city roads on Monday. Due to a tough competition in the city, animal rates have slightly decreased. On average, five to 10 percent decrease has been reported in the open market. While market analysts believe that there is no slump, and only the dealers have started doing away with unjustified demands to avoid long bargains.

There are some people who could not afford to offer sacrifice. This category included those people belonging to salaried classes, who get monthly salaries. Tariq Yousaf said his office had just released his salary and now he was planning to purchase an animal for sacrifice. Meanwhile, citizens are also receiving pamphlets and text messages from various welfare organisations with the appeal to give their sacrificial animal hides – Dailytimes