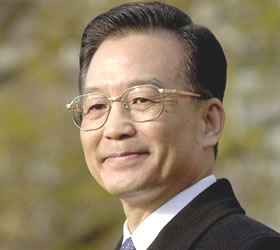 Guangzhou: Chinese Premier Wen Jiabao will visit Pakistan next month to what he said, “deepen strategic cooperation” and proposed establishment of a mechanism for formal and structured dialogue to ensure smooth and real time communication on all issues of common interest. “ We looking forward for establishing contacts between the political leaderships of the two countries,” Chinese Premier Wen Jiabao said Friday during bilateral meeting with President Asif Ali Zardari on the sidelines of the 16th Asian games. Two rounds of talks were held; the first with aides of both sides and the second a thirty minute one on one meeting between the two leaders. The one on one meeting was also attended by Pakistan’s Ambassador Masood Khan.

The President also held bilateral meeting with Thai Prime Minister Abhisit Vejjajiva and another meeting with the Chairman of Guangdong Automobile industry before leaving for the venue of 16th Asian Games spectacular inaugural ceremony.The meeting with Chinese Premier was also attended from Pakistan side by Bilawal Bhutto Zardari, Malik Amad Khan Minister of State for Foreign Affairs, Masood Khan Ambassador, Syed Mehdi Shah Chief Minister G-B, Saleem Mandviwalla Chairman BOI and Spokesperson Farhatullah Babar.Briefing journalists about the meetings today Spokesperson Farhatullah Babar said that Chinese Premier also announced beginning of the second installment of free commodity aid to the people of Gilgit-Baltistan from next week. The consignment of aid consists of diesel, coal and food commodities which will be supplied free by China as part of its aid to the flood victims in GB.China has donated US $ 250 million for flood relief and reconstruction besides assistance to stranded people in upper Hunza Attabad Lake region.  The Chief Minister of Gilgit-Baltistan also accompanied the President to thank the government and the people of China.

During talks President Asif Ali Zardari called for a currency swap agreement with China and taking full advantage of the Free Trade Agreement to take the bilateral trade between the two countries to 15 billion dollars soon.The President said the 14th session of JEC early next month in Islamabad was a great opportunity to review the entire range of bilateral economic relations for closer economic cooperation.The President also stressed the need for enhancing connectivity by working together closely on developing pipelines, rail links and fibre optic link.The President also urged Chinese investment in water and energy projects in Gilgit-Baltistan and Thar coal project in Sindh and called for the setting up of China-Pakistan Energy Corporation to institutionalize cooperation in the energy sector.Farhatullah Babar said that the President recalled his last visit to China in July and said that the visit was most reassuring as were his discussions with the Chinese leadership confirmed total unanimity of views between the two countries on all major issues.

The President congratulated the Chinese Premier and people on the successful inauguration of 16th Asian Games and thanked them for the warm welcome and hospitality accorded to the delegation. He said Pakistan was looking forward to jointly celebrating the 60th Anniversary of the establishment of Diplomatic Relations next year.About Pak-China relations the President said that Pakistan-China friendship is a factor of peace and stability for the region. Relations with China are of very special importance for the People’s Party government not the least because it was the Party’s founder Chairman Zulfikar Ali Bhutto who together with Chairman Mao and Premier Zhu Enlai laid the foundation of this friendship.The President reiterated Pakistan’s full support to China on a host of issues including Tibet, Taiwan and Xinjiang and described Pakistan- China strategic cooperation vital for defending common interests and to counter the forces of destabilization.“China’s support for Pakistan’s stability and social development in these challenging times is a source of strength for us”, the President said.President Zardari also thanked China for its steadfast support and solidarity with Pakistan and expressed appreciation for China’s assistance during the current devastating floods in Pakistan.Pakistan had now entered the phase of post-flood reconstruction. We are mobilizing our own resources but also need greater international assistance, he said.

He said that Mega-projects like Gwadar, KKH, HMC and Neelum-Jhelum Hydro-electric Plant, are shining symbols of our friendship.The President said that Pakistan is firmly committed to fight the evils of terrorism and extremism.Pakistan is committed to the peace process with India and desires to have friendly and good relations with India. We sincerely wish to hold meaningful dialogue with India to resolve all outstanding issues including the issue of Jammu and Kashmir.He said that Pakistan was doing its best to help Afghanistan achieve peace and stability and suggested closer consultations between Pakistan and China on Afghanistan. Afghanistan-China-Pakistan can promote trilateral cooperation particularly on Trans regional development projects and regional integration, he said.We would welcome Trans-regional cooperation involving economic project cooperation between China, Pakistan and Afghanistan. Chinese companies can use Pakistan as a logistical and transportation base for their investment in Afghanistan, the President remarked.Welcoming President Zardari the Chinese Premier said, “Every visit of the President has further deepened the Pak-China cooperation”.  On the sidelines of the 16th Asian Games opening ceremony the President also held a bilateral meeting with Thai Prime Minister Abhisit Vejjajiva.
Talking to the Thai Prime Minister the President called for early implementation of the Agreement on ‘Exchange of Offenders’ due to humanitarian considerations and offered to host next meeting between officials of the two countries on Combating Terrorism and Certain Other Crimes.

The President said in order to achieve true potential of trade between the two countries there was a need for early conclusion of Free Trade Agreement.The bilateral trade between Pakistan and Thailand stood at US$ 800 million last year.The President thanked Thai government for supporting Pakistan’s efforts to attain the Full Dialogue Partnership (FDP) with ASEAN and expressed the hope that efforts will continue in future as well. The President also apprised the Thai Prime Minister of Pakistan’s role as a frontline state against terrorism, of how Pakistan was a victim and how it was determined to root out militancy.Talking to the Chairman of Guangdong Automobile industry the President offered the Chinese automobile giant incentives to invest in Pakistan. The President asked the Chairman Board of Investment to stay behind in China for further discussions on prospects of Chinese investment in the country’s auto sector.Earlier the President and his entourage attended the banquet hosted by the government of Guandong province and Guangzhou city leadership at the Baiyun International Convention Centre in honour of the guests to the 16th Asian games inaugural – App