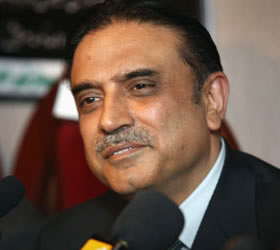 ISLAMABAD: President Asif Ali Zardari on Wednesday underlined the need to expedite Thar Coal Gasification by removing the bottlenecks and holding regular review of the progress.The President made these remarks in  meeting with the Chairman Board of Governors of Thar Coal Gasification, Dr Samar Mubarakmand, who called on him here at the Aiwan-e-Sadr.President Zardari said Pakistan had rich energy resources which had not been exploited and there was a need to come with an out of the box solution to provide relief to the masses and remove the problems faced by businessmen and industrialists due to load-shedding of electricity and gas.Dr. Samar Mubarakmand apprised the President on progress on Thar Coal Gasification project and the difficulties encountered.President Asif Ali Zardari appreciated the efforts of Dr Samar Mubarakmand and said the difficulties will be removed to accomplish the task within stipulated time – App