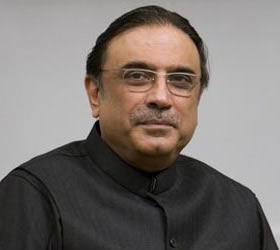 KARACHI: Site for the new proposed city Zulfikarabad in Thatta district has been identified and management consultants of the project will be appointed next month followed by inviting Expressions of Interest (EOI) from international firms early next year.This was stated in a briefing given to President Asif Ali Zardari at Bilawal House here Wednesday on Zulfikarabad City Project. The briefing by former chief secretary of the province Fazlur Rehman, who has been appointed Advisor to the Chief Minister on Special Initiatives and also Managing Director of the new city project was attended by the provincial Chief Minister Syed Qaim Ali Shah, provincial Ministers and senior federal and provincial officials.Briefing journalists about the meetings Spokesperson to the President Farhatullah Babar said the President also directed launching a robust promotional campaign by holding road shows in China, Singapore, Hong Kong and Europe to attract reputed international builders and consultants for the mega project.The road shows will be held by the Board of Investment and the Trade Development Authority of Pakistan (TDAP) in association with Zulfikarabad city project, he said.The meeting today was the fifth in the series held on the project ever since the idea was first mooted in August 2008 by the President,Farhatullah Babar said.He said the new city will be located in Keti Bandar, Kharo Chan, Jati and Shahbander in Thatta district on both sides of River Indus.
Reiterating that the new city will not be part of Greater Karachi but entirely a new modern city in the province the President also gave directions for speeding up implementation of the project to reduce congestion in the province’s main cities on the one hand and to honor the memory of the country’s first directly elected Prime Minister Shaheed Zulfikar Ali Bhutto on the other.

The meeting was informed that a bill “The Zulfikarabad Development Authority Bill 2010” had already been passed by the Provincial Assembly last month unanimously.
The Authority will run through governing body led by the Chief Minister while Chief Secretary, ACS Planning, Senior Member Board of Revenue, Secretary Finance, Local government and member Land Utilization of Board of Revenue will be members of the Authority.The President directed that main feature of the project should be to first convert useless state land into a productive asset rather than utilizing the already productive land. He also advised that computer graphics of an artist’s view of the new city be prepared and uploaded on the projects website.“The new city is absolutely essential to relieve pressure of national and international migrants on the two main cities of Karachi and Hyderabad which has strained their infrastructure”, the President remarked during the briefing.Besides having the latest infrastructure and facilities the new city should have provision for growth and expansion for the next over a century, he noted.

“Provision should also be made in the new city for industrial, electronic and science parks to boost employment and skills of the people and provide them economic opportunities that have eluded them for decades”, Farhatullah Babar quoted the President as saying.
Desalination plants and reverse osmosis procedure will be used for meeting the water requirements of the new city.Farhatullah Babar said the second meeting held in Bilawal House to review progress on the monitoring of development projects was informed that fourteen different projects had been selected for satellite monitoring.
These projects include new dams to be built in the province, the N-9 highway and some sections of RBOD. The daily progress, materials quality and the specifications followed will be monitored through satellite imaging that will reduce corruption and delays and enhance transparency, he said.The President also called for speeding up the project for satellite mapping of all schools, hospitals, health centers and government buildings in the province to create a database for use in future development and expansion.
Reviewing progress on dams project the President called for stepping up work on them so as to meet the growing requirements of irrigation and drinking water on the one hand and to empower the poor women of the areas through free distribution of state lands in the command areas of the new dams among them, on the other.

He said that free distribution of state owned agricultural land in the command areas of new dams among the poor women was aimed at empowering the marginalized sections of society and enhancing their participation in national rebuilding. The Benazir Income Support Program and mobile telephones that will be given to the women beneficiaries of BISP were also designed to empower them and eradicate poverty, he said.Separately the President had called for the launch on December 27 of free distribution of mobile phones among BISP beneficiaries in at least two districts.“Launching the distribution of free mobile phones among poor women on the third death anniversary of Shaheed Mohtarma Benazir Bhutto will be a tribute to the relentless and tenacious fight she led from the front for the emancipation and empowerment of women”, Farhatullah Babar quoted the President as saying – App