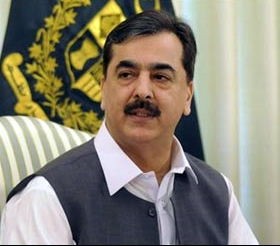 ISLAMABAD: Prime Minister Syed Yusuf Raza Gilani urged MNAs to follow the set procedure in the National Assembly, arguing it would not only save time but also put them in better position to represent wishes of the people.We have to make the Parliament more effective,” the Prime Minister said after some MNA’s raised Point of Orders to make their respective issues heard in the National Assembly on Wednesday.Gilani said the house could take up more effectively the issues concerning public including price-hike, load-shedding if it ran according to procedure. It will enable the ministers to take questions regarding their responsibilities and reply accordingly.“This (Parliament) is a debating forum; we’ll definitely sit with you and debate on whatever issues you like, may they relate to finance, economy, foreign policy or strategic dialogue,” the PM said.Gilani said it was well on record the current Parliament had carried out 442 unprecedented legislations with every single one being done unanimously. It wasn’t an easy task to make amendments in 101 -article Constitution; it’s for the first time ever in the history.Prime Minister said if the legislators came up with something good for the interests of country, government was ever ready to listen and take actions as well. He asserted the Parliament was not redundant rather it was responsible to uphold the Constitution. It was our sole responsibility to uphold the sanctity of the Constitution.
He said abolishing of Concurrent List was part of the Constitution, and an implementation Committee had been formed with Senator Mian Raza Rabbi to be the Head.Prime Minister said minorities, if they had apprehensions over Concurrent List, needed to meet Raza Rabbani for final settlement – App