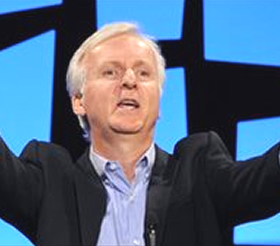 James Cameron has taken a swipe at studios who add 3D to films in post-production, saying that 3D retro-fitting should only be used for classic movies like Jaws or ET.The Avatar director said it had been a “mistake” to attempt to add 3D to the latest Harry Potter film, the Deathly Hallows: Part 1.And he predicted that the practice of adding 3D to movies in post-production would end with the widespread take-up of 3D by TV broadcasters.Speaking at the Blu-Con event in Beverly Hills, Cameron repeated his assertion that studios should not attempt to “shoehorn” 3D conversion – after the film has been shot – into the normal post-production time frame.

“I maintain you can’t do a good conversion of a two-hour movie with high quality in a few weeks like they tried to do with Clash of the Titans.”I don’t mean to throw that movie under the bus because my buddy Sam [Worthington, star of Avatar] is in it, but I think everybody realised that this was a point at which people had gone too far.”Cameron added: “You see another stumble with the most recent Harry Potter movie from the same studio making the same mistake – except really getting spanked for it now because they didn’t get the film done.”They announced it in 3D – threw a bunch of money trying to convert it to 3D in post-production and it simply didn’t work. They just didn’t get it done.”

Last month, Warner Bros said it could not complete the 3D conversion of Harry Potter and the Deathly Hallows: Part 1 in time for its 19 November UK and US release date.Warner Bros said it did not want to keep fans waiting for the film.Cameron said: “My personal philosophy is that post conversion should be used for one thing and one thing only – which is to take library titles that are favourites that are proven, and convert them into 3D – whether it’s Jaws or ET or Indiana Jones, Close Encounters… or Titanic.”Unless you have a time machine to go back and shoot it in 3D, you have no other choice. The best alternative is if you want to release a movie in 3D – make it in 3D.”At the end of October, it was announced that the first sequel to blockbuster hit Avatar will be released in December 2014 with a second to follow 12 months later.

Avatar holds the record for the highest-grossing film ever, having earned some $2.77 billion (£1.76 billion) at the global box office. A “special edition” 2D Blu-ray version of Avatar is set for release in November, with a 3D Blu-ray release in the pipeline.Cameron predicted that the days of 3D conversion in movies were numbered.”The thing that’s going to be the coffin nail for conversion is when the broadcasters start broadcasting thousands, if not tens of thousands of hours a year in 3D.”If you’ve got 5,000 cameras doing live sports feeding in over many different network delivery systems, it’s going to be pretty hard for Hollywood producers to claim that 3D is just too complicated to make a movie in 3D, when it’s being done every day by people a lot less talented and a lot less well-funded.”The director also said that glasses-free 3D would be a reality within a decade.”Once we get to auto-stereoscopic, that’s watching 3-D without glasses, it is going to be the way we watch all of our media. That’s probably eight to 10 years away – Bbc

‘Despicable’ on way to $500 million worldwide

'Despicable' on way to $500 million worldwide