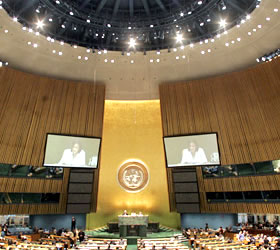 UNITED NATIONS: A Pakistani delegate told a UN General Assembly panel Tuesday that the “extraordinarily hard” floods in Pakistan have underscored the need to link adaptation of adverse impact of climate change to government’s economic planning.Speaking in the 192-member assembly’s economic committee, Farrukh Iqbal Khan, a counselor at the Pakistan Mission to the UN, also said Pakistan could face more challenges from climate change and he voiced disappointment over the slow pace of international negotiations to deal with the phenomenon.Listing some of the challenges confronting Pakistan, he said that rapid recession of Hindu Kush-Karakoram Himalayan glaciers threatens water flows into the Indus river system; changed pattern in monsoon and precipitation levels increases floods risks and droughts; severe water and heat stressed conditions in arid and semi-arid regions reduce agriculture productivity and power generation; increased upstream intrusion of saline water in the Indus Delta, adversely affect coastal agriculture, mangrove and breeding grounds of fish, and ,sea level rise, high cyclonic activity and higher surface temperature pose threat to coastal areas, especially Karachi.Iqbal Khan, who was speaking in a debate on Sustainable Development, said the multidimensional nature of sustainable development lay in its three basic constituents: economic growth, social development and environmental protection. Pakistan believed that the concept of a green economy was more of an “innovative approach” to sustainable development than a distinct concept of it.It was important that a green economy approach not become a vehicle to impose trade and other unilateral barriers on developing countries. Coherence in action, he added, should not be restricted to environmental concerns but should also aim to expand the economic opportunities of developing countries in key sectors such as agriculture.He highlighted the need for key decisions at the forthcoming conference in Cancun, Mexico:  a permanent body at the United Nations Framework Convention on Climate Change to improve governance of climate finance; a new fund of $50 billion; agreement on the level of emission reduction by developed countries and agreement on fast start finance – App