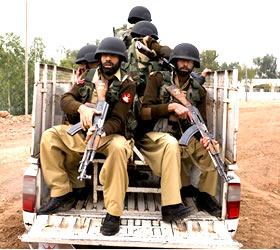 QUETTA: An official vehicle of the Frontier Corps (FC) escaped a remote controlled blast in Panjgur district, Quetta on Tuesday. A remote controlled device was planted near a seasonal river Rakshaan. The device was detonated when the FC vehicle was passing through the area. However, the vehicle was not damaged in the blast. The FC personnel and police squad reached the spot and cordoned off the area. Police has registered a case and investigations are underway. The banned outfit Lashkar-e-Balochistan has claimed responsibility for the attack. Calling from an undisclosed location, its spokesman vowed that such attacks would continue in future – Dailytimes