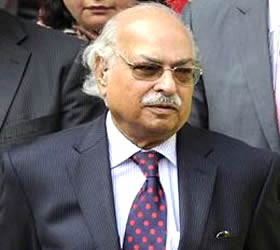 LONDON: Compilation of a Directory of Pakistani business  in  the  UK  and Europe  will  serve as a  useful instrument  in  promoting  business  by  people of Pakistani origin in the  European continent , stated  High Commissioner  Wajid Shamsul Hasan  on the  occasion of launch of  European  Pakistani Business Directory  here last night.The High Commissioner  congratulated  Nadeem Mirza of Eilaf Media Group  for  this commendable achievement  and called upon Pakistani Diaspora  particularly  businessmen to  encourage such  endeavours and make  use of  contacts  listed  in the directory.
While  appreciating consistent  efforts of  Nadeem Mirza, the High Commissioner  referred to  first ever  UK Pakistan Business Directory compiled by  him  in 2005 .  He said that Pakistan  High Commission fully  supports such efforts that  aim to bring  Pakistani Community together and promote Pakistani  business in  international market.Commercial Counsellor,  Pakistan High Commission, Mr. Saira Najeeb Ahmed said that  the Directory  containing  Europe wide  contacts of Pakistani businesses is a valuable  resource document  for the business community  and  other  organizations  including  government offices .She  called upon  businessmen to  subscribe to the  directory and make  a conscious effort to engage  with   business concerns  of Pakistani  origin as a matter of preference.Ms. Ahmed further said that  Eilaf  Media Group  had  earlier published a UK  Pakistani  business Directory in year 2005  which contains  listings of  Pakistani  businesses  throughout the UK whereas  this  directory  is  further  expansion  and  contains listings of Pakistani  business concerns  in other  European countries as well.
She further added  that compilation of  European directory was not an easy feat to achieve as  Nadeem Mirza  had been sharing  the obstacles and  difficulties  faced  by  him  in materializing the idea he had  been  toiling with  for last   few years .  The  struggle with  obtaining  contacts in various  countries and sponsorship  for publications  were  gigantic  tasks  that  were surmounted by  his love for   Pakistan.

The Secretary General  UKPCCI  Qamar Raza highlighted the significance of  the directory for  business community.  He said that the European Pakistani Business Directory  will serve as a  strong  bond  and link for Pakistani  business community and will help in establishing communication between them across the UK and  Europe .Raza said that  the Directory would be an   important tool  for promotion  of  businesses  comprising of  goods and services  owned by people of  Pakistani  origin and would further open the venues for joint  ventures.  Lauding the  hard work and  effort  put in by Nadeem Mirza, he said  that  “the  work that was supposed to be  done  by  an institution has been accomplished by  him alone.”Nadeem Mirza thanked  Pakistan High Commission in London and Embassies in other  European Countries , UKPCCI  and all those who sponsored the publication.

He   introduced the  salient  features of  the Directory and its utility for the business  community . He informed that it contains 2500 contacts of businesses owned by  people of Pakistani origin .The objective of this  initiative was to prepare  a consolidated data base  and   the idea was inspired by the fact that Pakistani community settled in the UK and Europe lacked  a networking  platform through which they could  communicate  with their  fellow  community members and  share  details  regarding  business.
He  added that the importance of networking could not be ignored in the competitive  business environment of today , and this  Directory fills  up the  gap  that  was felt by the Pakistani  community for a very  long time.Mirza added that a very positive  response has been received from the community  members, business men, government offices and over the launch of this source of networking  over the launch  of this directory adding that  Directory will also be launched  soon – App