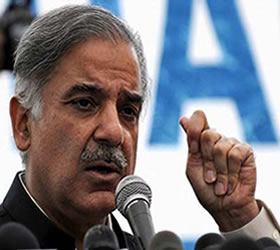 LAHORE:Promotion of cooperation in various sectors between the British government and the Punjab, the largest province of Pakistan, will result in further strengthening of relations between Pakistan and Britain. Punjab Chief Minister Mian Shahbaz Sharif and British Home Secretary Theresa Mary May agreed to promote cooperation between the British and the Punjab governments during a meeting, says a press release issued here on Sunday.After the meeting, the British Home Secretary along with her team attended a meeting of Punjab Security Board at Chief Minister’s Secretariat. On this occasion, CM Shahbaz Sharif expressed the hope that the international community would fulfil its responsibilities with regard to relief and rehabilitation of flood affectees as any negligence in this regard might lead affectees to extremism. He said that the Government and the people of Punjab were thankful to the British government, the people and the expatriate Pakistanis for extending help and assistance to the affectess of the worst flood in the history of the country. He said that many British welfare organisations are engaged in rehabilitation work for affectees including construction of houses in Southern Punjab.

He said that although the flood has adversely affected the economy of Punjab yet the Government would achieve the development targets at all costs in various sectors including education and health. Referring to the priorities for development in the province, he said that the Government is focusing on uplift of education sector and revolutionary measures have been taken in this regard. He said that setting up of Danish Schools is a landmark project of Punjab Government which is being started from South Punjab.He said that these centres of education and knowledge would equip the students of backward and far-flung areas with the latest knowledge which will also help curb extremism – Dailymailnews

Michael J Fox is happy with his past and present

Michael J Fox is happy with his past and present