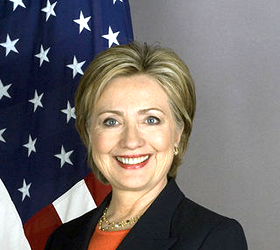 WASHINGTON: Top Pakistani and American officials on Wednesday opened three-day discussions under strategic partnership dialogue as they seek to move towards implementation of key development projects for Pakistan and put behind recent tensions arising from anti-terror fight along the Afghan border.Foreign Minister Shah Mahmood Qureshi and Secretary of State Hillary Clinton will conclude third dialogue of the year on Friday, with the wide-ranging agenda focusing on cooperation in  fields including secuirty, economic, trade, public diplomacy, energy, water, agriculture.According to Frank Ruggerio, Deputy Special Representative for Pakistan and Afghanistan, the U.S-Pakistan partnership is central to the two countries’ shared goals in the region, where the U.S. has engaged heavily both militarily and diplomatically to defeat al-Qaeda and curb a fierce Taliban insurgency in Afghanistan.
Pakistani officials say they seek substantive progress on issues of importance to Pakistan.Foreign Minister Qureshi laid out this week Islamabad’s emphasis on protection of its national interest and asked Washington to address its security concerns with respect to India over Kashmir and Afghanistan.“What we are trying to create is a long-term, mature and mutually beneficial partnership —-that dialogue, and the coordination of our policies, will define the direction and future of our bilateral relationship; as well as the success of the containment of terrorism and, quite possibly, the very future of the region,” he said at Harvard University.
On Wednesday Federal Information and Broadcasting Minister Qamar Zaman Kaira led the Pakistani team in discussions on public diplomacy and information technology with top US officials at the State Department.  The information minister was assisted Secretary Information Mansur Sohail and Secretary information technology Naguibullah Malik. Under Secretary of State Judith Michale, was leading the United States.
Minister for Water and Power Raja Pervaiz Ashraf and Minister for Agriculture Nazar Muhammad Gondal discussed expanding cooperation in water and agricultural fields on Wednesday.
Finance Minister Dr Abdul Hafeez Shaikh and Defense Minister Chaudhry Ahmed Mukhtar are also part of the high-level Pakistani delegation.Pakistan is likely to press its demand for talks on getting civilian nuclear technology from the United States. Afghanistan reconciliation process is also likely to figure in  discussions.At the Pentagon, Defense Secretary Robert M. Gates and Navy Adm.Mike Mullen are to meet with Pakistani Army Chief of Staff Gen. Ashfaq Parvez Kayani.U.S. and Pakistani defense leaders also are scheduled to meet to discuss American military aid, counter insurgency strategy, and flood relief.
The dialogue takes place amid reports that the Obama administration is putting the final touches on a security assistance package totaling as much as $2 billion over five years to help Pakistan fight extremists on its border with Afghanistan.
The US media says the aid is expected to be announced later this week and aims to  address Pakistan’s insistence it does not have the capability to go after terrorists and needs more support from the United States.  The aid will help the Pakistanis purchase helicopters, weapons systems and equipment to intercept communications. It falls under the U.S.â€™s Foreign Military Financing (FMF) program, which provides grants and loans to countries to purchase weapons and defense equipment produced in the United States, say US media reports.Stressing the broad nature of bilateral ties, the State Department officials said this week that the US-Pakistan partnership is based on “shared democratic values, mutual respect, trust, shared interests.”
The talks are aimed at moving beyond tensions that recently cropped up following
NATO  helicopters’ intrusions into Pakistani airspace and death of Pakistani soldiers in a missile strike on a Pakistani tribal border post. The incident led to closure of Torkham gate which allows NATO supplies into Afghanistan. The border route was re-opened by Pakistan after ten days.Pakistan will also seek greater trade access for its textile products during the strategic dialogue which will have a plenary session on Friday.
A separate session during the strategic dialogue will focus on US support for Pakistan’s recovery from devastating floods this summer, which according to World Bank and Asian Development Bank, inflicted a loss of more than nine billions dollars on the country.
According to Pakistan’s ambassador to the United States Husain Haqqani, Islamabad will raise the issue of Dr Aafia Siddiqui and problems facing Pakistanitravelers to the United States. Pakistani officials will also urge grant of temporary protection status for Pakistanis in view of recent floods – App

Pakistan rejects report of CIA’s access to its nuclear facilities

Labour,wage earners are pillar of strength for PPP: Zarda

Labour,wage earners are pillar of strength for PPP: Zarda