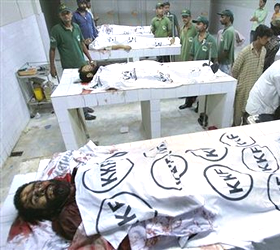 KARACHI: At least 7 persons have been reportedly killed in indiscrminate firing by unidentified motorcyclists in the Shershah market in western part of the city on Tuesday evening.According to Chippa sources, their ambulances were shifting the dead bodies and several injured to various hospitals.Meanwhile, the Rangers and Police personnel have reached the spot and cordoned-off the area – App