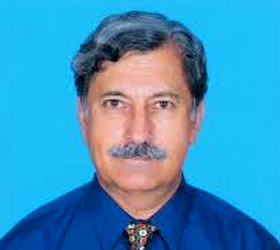 KUALA LUMPUR: Dr. Professor M. Qasim Jan of Pakistan Tuesday received the prestigious prize of Islamic Scientific and Cultural Organization (ISESCO) for his sustained contributions in mineralogy, petrology, geochemistry, tectonics and seismology of the northwest Himalaya. The prize was awarded by Deputy Prime Minister of Malaysia Tan Sri Muhyiddin Yasin at the inaugural session of the 5th Islamic Conference of Ministers’ of Higher Education and Scientific Research (5th ICMHESR).The Inaugural session was attended among others by the Assistant Secretary General of Organization of Islamic Countries (OIC) Ambassador, Abdul Moiz Bokhari of Pakistan, High Commissioner for Pakistan in Malaysia Masood Khalid, representatives of Higher Education Commission and COMSATS of Pakistan and over one thousand participants including 160 delegates from 43 Islamic Countries.
Dr. Qasim Jan is a renowned geologist and a reputed academician. He has conducted a number of collaborative projects with scientists from USA, UK, other European Countries, Japan and China.He has some 245 publications, many in national and international journals with strong referee system. He obtained his Ph.D from the University of London in 1977 and was awarded DSc (Honorary) degree by King’s College London in 2009.He has undertaken Post Doctoral research at the universities of Oregon and Oklahoma, (USA), Leicester, (UK Twice), and Dartmouth College, USA.Dr Jan also held the posts of Director of the Center of Excellence in Geology, University of  Peshawar. Vice Chancellor of the University of Peshawar, Sarhad University of Peshawar, and Quaid-i-Azam University, Islamabad.
Currently, he is Secretary General of the Pakistan Academy of Sciences (PAS), Islamabad, and Association of the Academies of Sciences in Asia.The other recipients of prizes included,  Prof. Dr. Ulmas Mirsaidov of Tajikistan in Chemistry, Professor Dr. Zaid Odibat of Jordan in Mathematic, Prof, Dr. M Shabat of Palestine in Physics and Prof. Dr. Embi Mohamed Amin of Malaysia in Technology.The theme of the conference is; “Enculturation of Quality In Academia, Research and Innovation Towards Prosperity of Ummah”.
The participants will  discuss reports on “Network of Women Scientists in OIC Member States”, “Recent Trends in Emerging Technologies and current commitments of Islamic countries”, “Ranking of the Universities of the Islamic world and revised version of the documents on Procedures for the Ranking of Universities in Islamic Countries”, “Strategy for Promotion of nano technology in the Islamic countries”, “Atlas of the Islamic World Innovation “and various related matters.
The delegates also visited an exhibition on the current state of Higher Education in Malaysia held concurrently with the Conference.The exhibition focused on aspects of Higher Education that coincide with the aims of ISESCO which include strengthening and promotion of cooperation in Education, Science, Culture and Communication as well as the development of applied sciences and the use of high technology in line with Islamic values, among member nations – App

Haqqani rejects NATO claim that Osama is in Pakistan