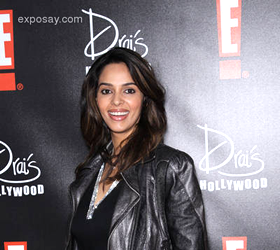 Bollywood actress Mallika Sherawat  is going all out for her new film HISSS. She was so excited about her flick that she danced to the tune of a snake charmer during the promotion.As we all know, Mallika is quite popular for her penchant to be in the limelight by indulging in theatrics in front of the media. She called around 12 snake charmers in the recent press meet in Delhi, desperate as she is to promote Hisss.What Does Hisss mean? And from where did the title Hiss come from?
Our producer Govind Menon and directors came up with this name as it was totally different and ours is not a run-of-the-mill Bollywood movie.

Since there are so many shades of Naagin in this movie, which one associates more with you and your character?
All of them — my nature is like a snake. I love to scare all those who come in my way. I am a real life snake.

How was your experience working with Irrfan Khan?
Irrfan is a versatile actor and he is well known in Hollywood for his acting. He has worked in many Hollywood movies like Slumdog Millionaire and A Mighty Heart so I as an actor got a great opportunity to work with him.

What about your make-up and your appearance in the movie?
I took nearly 7 to 8 hours to get ready with the entire make up and wearing the costume. It was so heavy and long that three people had to carry me and my tail everywhere.

Any weird experiences while shooting?
Before starting the shooting, we were to pray at a snake temple in Kerala and then start the shooting, thus, the day used to be perfect, and we also noticed that, shooting without praying used to make it unsuccessful. In fact, we saw many snakes near our shooting place, but they didn’t harm us.

Tell us about your lovemaking scene with the snake?
While shooting in Kerala, there was a scene where I had to kiss a snake and lick him passionately. It was a rainy scene, where I had to shoot this love making scene with the snake inside mud and there in, I had to kiss and lick the snake. I was doing whatever the script demanded and my director would scream at me, saying, “Mallika, you are the naagin, be hot, feel the passion.”

So, how was your experience of kissing the snake? The snake might have hurt you..
Hmm…it was once in a lifetime experience, I kissed and licked the snake as he was my lover and believe me that was my best onscreen kiss till date. A snake can’t hurt me as it was already scared of me, as I am more poisonous than him.

As seen in the promos you are looking very scary and also killing people. Are ‘you’ scared of snakes? Do you believe in mythology?
I am not scared of snakes; in fact snakes are scared of me. And talking about my belief, yes, I do believe in a snake woman as I believe in Ramayana and Mahabharata, they are also mythology but people have faith in them.

It was in the news that your brother created a ruckus while shooting for one of your semi-nude scenes?
Yes, it’s true, no brother can see his sister going nude or semi nude on screen and that too, in front of so many men. But who cares, I don’t listen to him as I know what I am doing. It’s my job after all.

Do you think any other actress from Bollywood can do the naagin role better than you did?
(Smiles) May be, but all will be born in the future.

Any homework you did before doing this role?
Of course, I watched many Japanese, Chinese and Hong Kong movies which were related to snakes. I also watched Indian movies of the same topic, but they were totally different. I watched some South Indian movies also.

What is the difference between your snake movie and the previously made naagin movies of Bollywood?
There is a hell lot of difference, the previous naagin movies were full of songs, mine is full of action, it’s a modern day naagin and they didn’t show how a woman turning in to snake. But in my movie, with the help of special effects of sound and graphics, you can see the transformation in front of you, from a snake into human and from human to a snake.

What kind of special effects…..
I specially went to Hollywood for our Bollywood film to get their talent and use in Hiss. My movie has all kinds of masala that a Bollywood movie has but with the Hollywood’s tadka. Lots of lights and robots are used for the movie.

Hisss is your comeback in Bollywood…
It’s not my comeback as I was always with Bollywood, yes I was in LA (USA) for some time but my roots were here in India. I missed my country, I was there for some Hollywood projects.

Recently you went to TV soap ‘Na Aana Iss Des Meri Laado’ which is a Harvanvi society serial and you also belongs to the same culture, do u think it’s the best way to reach out to rural audience?
It’s not that I want to woo my home state through the serial, but it is to reach everyone’s drawing room rather than only appearing on TV.So should we call the snake woman as a superhero of Bollywood…Yes, as Hollywood has its heroes in fictitious characters like Spiderman, Batman and Superman. It was time to bring out an Indian hero in front of the world… – Timesofindia