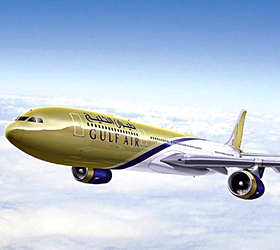 DUBAI: Gulf Air said Tuesday Bahrain’s government aims to pump more than $1 billion into the struggling carrier as it works to retool its business.The move will shore up Gulf Air’s balance sheet and increase the island state’s commitment to the government-owned carrier, which has cycled through new management and lost money for years as it struggles to compete in the crowded Mideast aviation market.Gulf Air said the government raised the carrier’s authorized share capital by 400 million dinars ($1.06 billion). It described the move as the airline’s first “capital restructuring” since Bahrain assumed full ownership in November 2007.The carrier was once owned by a consortium of Gulf states.As they backed out to form their own competing airlines, Bahrain was left as Gulf Air’s sole owner. It is now fully owned by the country’s sovereign wealth fund.”The proposed further injection of funds from the government of Bahrain announced today highlights the importance of this business to the Bahraini economy,” said Talal Al-Zain, chief executive of the state fund that owns Gulf Air. “It will go towards securing a stronger future for the carrier and assist in ensuring a swift return to Gulf Air’s profitability.” The company expects to use the additional funds for ongoing restructuring costs.

Gulf Air last year hired the former head of Royal Jordanian Airlines, Samer Majali, as chief executive in a bid to revive its business. Majali quickly launched a review of Gulf Air’s entire operations, and said the carrier might consider shedding unprofitable routes and renegotiating billions of dollars worth of aircraft orders with Boeing Co. and Airbus.

The airline is a major employer in Bahrain. It remains under close scrutiny both by an employee union and Bahrain’s young Parliament, which faces elections on Saturday.Once the premier airline in the region, Gulf Air has struggled in recent years. It faces stiff competition from well-funded Gulf rivals Emirates, Etihad Airways and Qatar Airways, as well as smaller budget carriers such as FlyDubai.The state fund that owns Gulf Air, Bahrain Mumtalakat Holding Co., saw its losses more than double to $485 million last year. It attributed much of the wider loss to financial challenges at Gulf Air and smelter Aluminium Bahrain.

Mumtalakat announced Sunday it is looking to raise more than $500 million by selling off a stake in the smelter, which goes by Alba.Gulf Air didn’t say when its additional funds would be injected or how the financing would be provided. Al-Wasat newspaper reported that a royal decree issued last week authorizes the government to borrow additional funds to cover the additional funding needs. – Arabnews