Ronaldo on song as Real prepare to host AC Milan 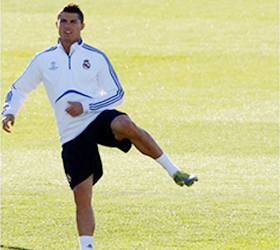 MADRID: Real Madrid forward Cristiano Ronaldo has shaken off his relatively poor early-season form in perfect time for Tuesday’s Champions League Group G clash with fellow European giants AC Milan.The meeting between the two clubs, who have won 16 European Cups between them, is the pick of matchday three in the continent’s elite club competition. Wednesday features holders Inter Milan hosting Tottenham Hotspur, Barcelona playing FC Copenhagen and Manchester United taking on Bursaspor.Chelsea travel to Moscow to play Spartak on Tuesday knowing that a third victory in three games would virtually assure them of a place in the last 16, while Arsenal are also looking to continue their perfect start when they host Shakhtar Donetsk.Portuguese international Ronaldo has taken longer than usual to get into his stride this season and Real fans whistled at him for several lacklustre performances at the Bernabeu.However, after scoring twice against La Liga rivals Deportivo Coruna on Oct. 3, he netted another double and set up two for striker Gonzalo Higuain in Real’s 4-1 victory at Malaga on Saturday and is eagerly awaiting Milan’s visit.“I knew that things would come together and thank goodness they are coming together. I am very happy and full of confidence,” Ronaldo told reporters.

“We know that if we win (against Milan on Tuesday) we are a step away from qualifying for the last 16. We are playing at home and have an obligation to win.”Real, coached by Ronaldo’s compatriot Jose Mourinho, began their bid for a 10th European Cup with victories over Group G rivals Ajax Amsterdam and Auxerre and top the standings on six points. Milan were held to a 1-1 draw in Amsterdam at the end of last month and are second on four.

In Group A, Inter and Tottenham both have four points from two games and Mourinho’s successor with the Serie A champions, Rafael Benitez, is expecting a tough match against the Premier League side, who are debuting in the competition this season.Tottenham ended Fulham’s unbeaten start with a 2-1 win at Craven Cottage on Saturday, while a goal from in-form striker Samuel Eto’o gave Inter a 1-0 victory at Cagliari on Sunday.

“I watched (Tottenham’s) match against Fulham,” Benitez, who coached Premier League side Liverpool before replacing Mourinho at the San Siro at the end of last season, said on Inter’s website (www.inter.it).“It will be a difficult game on Wednesday against a team that plays with pace and energy,” the Spaniard added.Tottenham manager Harry Redknapp, who will have to do without the inspired form of suspended Dutchman Rafael Van der Vaart, was pleased with the performance of Aaron Lennon against Fulham after he used the England winger, who is coming back from injury, as a second-half substitute.

“I thought Aaron would give us some pace and a threat behind and that’s what he did,” Redknapp said on Tottenham’s website (www.tottenhamhotspur.com).“He got at people every time he got on the ball and made things happen. That was him back to his best.”Redknapp’s counterpart at Manchester United, Alex Ferguson, said he was concerned about his side’s lack of killer instinct after they squandered a 2-0 lead and were held 2-2 at home by West Bromwich Albion on Saturday.“From our first-half performance, which was outstanding, the criticism is that we didn’t finish them off,” Ferguson said on United’s website (www.manutd.com).“Where it should have been 5-0 at half-time, we’ve gone in 2-0 up. That is an area we have to be concerned about – Arabnews

President directs for arrest of those behind target killings in Karachi

President directs for arrest of those behind target killings in Karachi