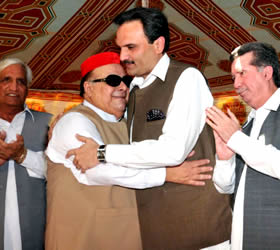 PESHAWAR: The Chief Minister Khyber Pakhtunkhwa, Ameer Haider Khan Hoti has launched the distribution of Watan Cards in District Peshawar in aceremony.70 cards were distributed amongst the affectees and as such, as per mutual understanding with the NADRA and PDMA, two centers at Govt: High School Mian Gujar and GHSS No. 1 Peshawar City have been established to make the distribution in Peshawar District.An official letter issued by the DCO Peshawar, further says that in this connection, after due consideration schedule was announced in daily newspapers as per capacity of the NADRA to avoid over burden on these centers as well atop ensure peaceful distribution on these centers.The centers were operational, so surprise visits were made to both the centers, where it was found that the affectees were following the schedule announced in the press as well as the team consisting of Illaqa Tehsildar.The concerned SHO and Halqa Patwari were present in their respective stations to address any problem arising on the spot during the distribution to make it more comfortable for the flood affectees.

During the inspection, there was no such imminent problem witnessed during inspection of the centers, however, the NADRA authorities have been approached to enhance the computer system in these centers to speed up the distribution. At present the process of distribution is a little bit slow as the NADRA may speed up distribution process such as to ensure distribution of 2000 cards per day as per their capacity.The District Officer Revenue & Estate Peshawar have also been directed to make visits of these centers on daily basis and intimate the number of cards to be distributed on these centers – Sananews

FBI had been forewarned of Mumbai attacks