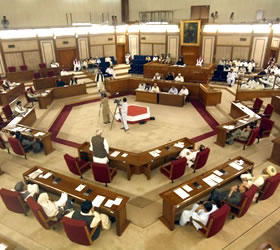 QUETTA: The members of the Balochistan Assembly during Monday session passed two resolutions to bring Balochistan universities out of financial crunch besides criticizing recent incidents of target killing in Karachi. Speaker Muhammad Aslam Bhootani presided over the assembly sitting which started 40 minutes late of its actual time.Delivering speech on his adjournment motion No. 4 on acute shortage of funds faced by universities of Balochistan, the mover MPA Sheikh Jaffar Khan Mandokhail of the Pakistan Muslim League-Q said all five universities of Balochistan were facing huge financial crises even they had no funds to pay salaries to teachers and other staff. He maintained the varsities had been facing Rs 590 million shortfalls out of commitment of Rs 1427 million. Giving example, he said at one hand, University of California had its $ 25 billion surplus in banks while at other hand; shortfall of funds had been damaging the educational system in Pakistani universities.
He demanded that his adjournment motion should be turned into two resolutions including one urging the federal government to release funds for Balochistan universities and other emphasizing the Balochistan government to immediately release Rs 500 million to its universities to meet their funds’ shortfall. He also demanded passage of Model University Act. He alleged that vice chancellors of some universities while violating universities appointment procedure had recruited their relatives in the varsities which had increased expenditures of the admin section by three times.Another PML-Q lawmaker Pir Abdul Qadir Gilani raised question whether target killing of teachers and hair-dressers in Balochistan could put the province on the track of progress and prosperity. He demanded establishing new universities in far-flung areas of the province.Minister for Irrigation Sardar Aslam Bezinjo noted that educational process in Balochistan universities might stop for a long time if funds were not released to them with immediate effect.
Minister for Education Tahir Mehmood demanded of the legislators to allocate funds for educational institutions including universities from their PSDP funds.
Minister for Livestock Qambar Gichki also sought funds for the universities. He alleged that law enforcement agencies led operation was launched in district Awaran and a number of farmers and youths had been picked up.
Minister for Communication and Works and the Pakistan Peoples Party leader Mir Sadiq Umrani regretted that target killing of teachers had badly affected educational system in Balochistan. He said that he was in favor of turning Mandokhail adjournment motion into two resolutions. He lamented that hundreds of thousands of people in Dera Allahyar, Osta Muhammad and other districts had been deprived of clean drinking water as embankments of Pat Feeder, Rabee and Kirthar canals had been damaged by raging flood tides in Eastern Balochistan.Advisor to Chief Minister Uzma Pir Alizai viewed that imparting education process would be badly affected if funds were not released to Information University Balochistan.The Speaker Bhootani put the adjournment motion to the house for approval as two resolutions which passed them unanimously.
Earlier, speaking on point of order, Minister for Revenue Eng. Zamarak Khan alleged that a mafia organization was involved in target killing of laborers in Karachi. He recalled that last days, a group of laborers were sitting at a makeshift restaurant in Karachi when gunmen hailing from a mafia organization opened fire, killing them. He said most of people shot dead in recent wave of target killing in Karachi were daily wagers.
He demanded of the federal government to issue notification on flat rate of electricity for farmers of Balochistan. He alleged that staff of Customs and Law enforcement agencies was involved in smuggling of millions of cattle to Iran and Afghanistan from Balochistan.
Jaffar Mandokhail opined that Karachi was facing a mafia style politics.  He said carnage of common and innocent people was committed in recent incidents of target killing in Karachi.
Minister for Youth Affairs, Cap (retd) Abdul Khaliq Achakzai said no one should be permitted license to kill to assassinate innocent people in Karachi.
Minister Sadiq Umrani recalled that it was martyrs Benazir Bhutto who run a prolonged struggle for restoration of democracy and reinstatement of deposed judiciary.
PPP MPA Haji Ali Madad Jatak sought action against police for searching his vehicle. He staged boycott from the house to protest non-debate on his privilege motion against police. Pir Gilani also staged walkout in favor of Jatak.
Minister for Jails Sultan Tarin condemned target killing in Karachi and demanded increase in Prison Department staff salaries by 100 percent at per with Balochistan Police and Balochistan Levies Force.
Minister for Public Health Engineering and the Jamiat Ulema-e-Islam leader Maulana Abdul Bari accused that no ambulances were being provided to shift persons killed in Karachi target killing to their native areas in other provinces. He demanded that a committee headed by Chief Minister Balochistan should contact with the Sindh government for protection of people in Karachi hailing from Balochistan.Minister for Livestock Mir Qambar also said that he was failed in controlling livestock smuggling to Iran and Afghanistan as what he alleged federal and provincial law enforcement agencies were involved in the menace after taking their lion share.Later, the Speaker prorogued the house for indefinite period – App