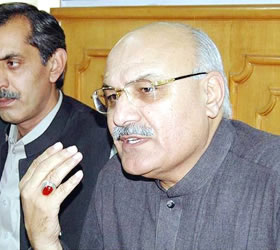 PESHAWAR: The U.S. Consul General in Peshawar Elizabeth H. Rood and Minister of Information, Khyber Pakhtunkhwa, Mian Iftikhar Hussain, inaugurated on Sunday a security building at the Peshawar Press Club.This new building, along with other enhancements will improve security at the Peshawar Press Club, which was damaged by a suicide bombing attack on December 22, 2009.“This press club is more than just buildings; it is a vibrant hub for interaction among colleagues and serves as a center for training.Journalists based here in Peshawar play a vital role not only reporting about Peshawar, but also about the tribal areas,” said Consul General Rood.The Press Information Department of the FATA Secretariat and the U.S. Government contributed funds and equipment to the repairs to the Press Club and the construction of a security building, which includes walk-through metal detectors, a surveillance camera, and an uninterrupted power supply – Sananews