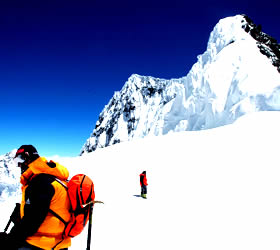 ISLAMABAD: Pakistan’s luminous mountain peaks attracted 24 expeditions from different countries across the globe this season, which contributed US $0.176 million to the national exchequer. These expeditions comprised of 200 adventurers, which conquered or attempted to ascent Pakistan’s lofty peaks located in Gilgit-Baltistan, Chaudhry Muhammad Sharif of Ministry of Tourism told this news agency.Pakistan is a hotly sought after destination for tourists around the world, especially for the daredevils who set out to summit some of the most challenging, nay, dangerous mountains. Five of 14 tallest peaks of the world are situated in Pakistan K-2, Nanga Parbat, Gasherbrum I, Gasherbrum II and Broad Peak- which put this South Asian country at a unique ranking in the world of tourism. It mountains are declared ‘Killers’ owing their track record of human lives they claim every year. But, this doesn’t scare away the climbers. Instead it further stirs their craze to tread upon these daring peaks.

“Ours is a land of four seasons tourist destination which is destined to allure the tourists in days to come,” Chaudhry Sharif said.

He elaborated tourism in Pakistan saw a temporary halt due to certain reasons. However, he was confident and predicted a brighter future for this multi-billion trade in Pakistan.

Meanwhile, the Ministry of Tourism has reduced royalty fee upto 40, 10 and 5 percent for various mountains for the year 2011.

The ministry decided not to charge royalty fee for peaks upto 6,500 metres. However, 10 percent would be reduced for the mountains situated in Chitral, Gilgit and Ghizer except on Spantik/Golden Peak – Brecoder