Only parliament can amend constitution: Babar 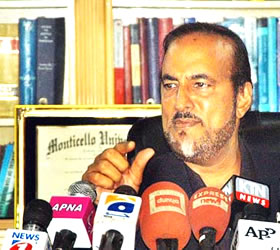 LAHORE: Federal Minister for Law, Justice and Parliamentary Affairs Dr Babar Awan has said only consistent democratic system can strengthen the country.Addressing a press conference at the residence of Dr Fakharud din, secretary information Pakistan People’s Party Punjab after offering condolences on the demise of his brother here on Sunday, he said that the constitution did not allow any government employee to participate in  politics, adding that one could participate in election only two years after the retirement.He said three constitutional pillars of the country including judiciary,parliament and administration came into being as a result of the constitution and he added that only parliament had right to make, change or repeal the constitution.He said that always unconstitutional activities pushed the country back, adding these kind of acts weakened country’s culture, economy, progress and future.
He said some friends were doing politics keeping themselves behind the scene, he suggested they should open themselves and showed their roadmap to the masses.
He said why Nawaz Sharif was not accepting a modest chairman of NAB, adding that he had forgotten out of turn promotion of Pervaiz Musharraf.
He remarked the PPP had faced politics of “ stick and bullet” and now it was facing politics of “ bullet and abuse “but, he added it would follow the saying of Mohtarma Benazir Bhutto Shaheed that “ democracy is the best revenge”.
He told the media that it was decided that sessions of the National Assembly and the Senate would be convened from November 1 as the government wanted that the parliament should be the centre of political,national and constitutional affairs.
To a question, he said institutions and the constitution were important than the government as governments come and go.He said it was the 1973 constitution which made the country an Islamic Republic of Pakistan.He condemned the incidents of target killing in Karachi.Several leaders of the PPP were also present on the occasion – App

Nawaz Sharif calls for national accord to strengthen democracy