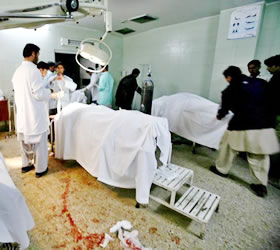 QUETTA: At least one person has been killed in an attack by unknown gunmen on a saloon in Saryab Kechi Baig area of the city.According to sources, three armed men on their motorbike managed to escape the scene after the attack. The victim, Muhammad Arif, died on the spot.The dead body of the deceased was moved by an Edhi ambulance to Civil Hospital, Quetta; after completion of necessary preceding it was handed over to the family of the victim. Muhammad Arif was a resident of Toba Tek Singh, Punjab.Abdul Ghaffar, brother of the deceased, said that unknown armed gunmen opened fire with a Kalashnikov at the saloon and escaped from the scene