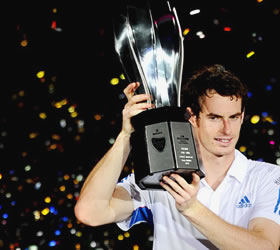 Andy Murray crushed Roger Federer in straight sets in a one-sided final to claim victory in the Shanghai Masters on Sunday.The Briton, who also defeated the former world number one in the Toronto Masters final in August, took just under 90 minutes to secure a 6-3 6-2 victory.World number four Murray has now beaten Federer eight times in their 13 meetings, although has crucially lost both times they have met in the final of a grand slam (U.S. Open in 2008 and this year’s Australian Open final).And there was never any doubt that Murray would continue his fine record against Federer, with the Swiss making a remarkable 30 unforced errors while failing to convert six break points.“I enjoy playing Roger,” Murray told the official ATP Tour website. “I don’t find it easy at all. It’s incredibly difficult every time.”But I love the challenge of playing against him. Everytime I go on court, I know I need to play great tennis to win against him. I don’t know if my game matches up well against his or not, but I’ve played some of my best tennis against Roger.”I hit a lot of great shots on the run and you have to come up with a lot of great shots against Federer if you want to beat him.”Federer, who moves back up to second place in the world rankings behind Rafael Nadal despite losing the final, added: “I had a good tournament and thought I played well this week.”I had some great wins against Robin Soderling, John Isner, Andreas Seppi and Novak Djokovic and I’m very happy with where my game is at.”Today could have been better, but Andy was the best player in the tournament so he deserved it – Cnn