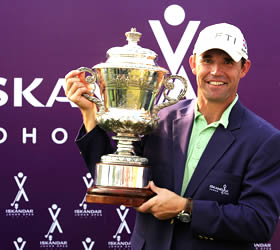 Johor Bahru, Malaysia, October 17: Irishman Padraig Harrington completed a stylish victory parade with a closing three-under-par 69 at the US$1.25 million Iskandar Johor Open to comfortably snap a two-year winless run on Sunday.The three-time Major winner, who held an overnight five-shot lead, was never threatened by the chasing pack at the Horizon Hills Golf and Country Club as he returned to the winner’s rostrum for the first time since lifting the US PGA Championship in 2008.His winning score of 20-under-par 268, worth US$198,125, was three shots clear of second-placed Noh Seung-yul of Korea, who stretched his lead on the Asian Tour’s Order of Merit with his runner-up cheque of US$135,625 after a superb 65.Chinese Taipei’s Lin Wen-tang finished third, four back, after a 68 while Singaporean Mardan Mamat was fourth following a 68 as well. Kiradech Aphibarnrat of Thailand and Australian Scott Barr shared fifth place on 274.It was Harrington’s third title on the Asian Tour following victories in Taipei and Hong Kong previously. “Two years is a long time, especially when you’re reminded most weeks you play. It’s nice and very important for me to win. It’s somewhat a monkey off your back,” said the smiling Irishman, who held at least a share of the lead for the first three rounds. “Winning is a habit. Every time you win, it is important but when you haven’t won for a while it does add a bit more emphasis to it. It makes it all the more memorable,” added Harrington, who was presented a purple Iskandar Johor Open jacket along with the top cheque and gleaming Iskandar Cup.Showing no ill effects of a neck injury which almost forced him out of the third round, the 39-year-old, making his debut in the event, tightened his grip with three straight birdies from the second hole on a day when conditions were ideal for low scoring following an early thunderstorm which delayed play for two hours.Noh and Kiradech, touted as the future of Asian golf, fought brilliantly and got to within to four strokes of Harrington with matching birdies on 11. But the Irish star shifted into fifth gear with birdies on 11, 13 and 14 to lead by seven. Two bogeys over his closing three holes mattered little in the end for the new champion.

“There’s no doubt that it was my week to win. If you had followed me for the four days, I don’t think anyone would have questioned that my name was written on the trophy before the tournament started. I got the breaks all the way through. I hit some good shots and had a few breaks. Luck of the Irish? I’ll accept that,” smiled Harrington, who will take a two week break before returning to Asia for the season-ending events. Noh, 19, kept up his slim hopes by moving to five under for the round through 11 holes but a bogey on 13 where he found water with an errant drive ended his fight. “I tried to follow Padraig. I had a very good start but so did he. I saw him go into the water on the fifth hole. I thought maybe I could catch him a little but he was too good,” said Noh, the reigning Maybank Malaysian Open champion.“13 stopped me. I was just aiming for second place after that. I missed a few birdies but finished good with three birdies on the last three holes,” added the young Korean, who widened his lead on the Asian Tour Order of Merit with his season’s haul of US$801,986, some US$243,220 more than second placed Marcus Fraser of Australia.

Playing with Harrington, Lin, a five-time winner, failed to ignite a charge, with a double bogey on seven spoiling his day. “I hit my second shot into the bunker and it was a tough lie. It slowed me down. My putting also didn’t find the holes and Padraig was in good form. There were no par fives for him as he played them like par fours. And he putted good as well. He deserved the win,” said the 36-year-old Lin, who earned US$76,250.Last year’s champion K.J. Choi of Korea finished tied eighth while Europe’s victorious Ryder Cup captain Colin Montgomerie of Scotland finished equal 11th on 278. Retief Goosen of South Africa, winner of the Iskandar Johor Open in 2008, was a further shot back in joint 14th position.The main sponsor of the Iskandar Johor Open is the Iskandar Regional Development Authority (IRDA). It is also supported by platinum sponsor – UEM Land Holdings Berhad, the master developer of Nusajaya which is a key driver of Iskandar Malaysia and hosted by the Horizon Hills Golf & Country Club. Other co-sponsors include 100 Plus, Auto Bavaria Johor Bahru, Blackberry, Heineken, Kuok Brothers Sdn. Bhd, Pulai Springs Resort, Ricoh, Srixon, TaylorMade-adidas Golf, Telekom Malaysia, Titoni and Winston Wine. The official media partners are Fairways, Golf Malaysia and ParGolf. The tournament is sanctioned by the Asian Tour and the Johor Golf Association.

The Iskandar Johor Open
The inaugural edition of the Iskandar Johor Open kicked off in August 2007. Held at the Johor Golf and Country Club (JGCC) in Johor Bahru, Malaysia, it carried a prize purse of USD$300,000 and the honour of hoisting the trophy for the first time fell to Artemio Murakami of the Philippines. In October 2008, the championship offered an improved purse of USD$500,000 and South African Retief Goosen went on to clinch the coveted trophy at JGCC. 2009 marked a milestone in the history of the Iskandar Johor Open, with a 100% increase in prize money to USD$1,000,000, certainly pointing to the tournament’s growing stature. It was won by Korean K.J. Choi, who triumphed over rising Indian star Himmat Rai and defending champion Retief Goosen.