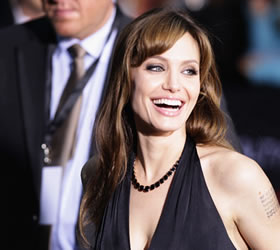 With her first directorial effort underway and generating controversy over its alleged content, Angelina Jolie advises critics not to jump the gun and to “[with]hold judgment until they have seen the film.”The yet-to-be-titled movie, a love story currently shooting in Hungary, focuses on a Serbian man (Rade Serbedzija) and a Bosnian woman (Zana Marjanovic) who meet on the eve of the country’s 1992-95 war and the effect the conflict has on their relationship.But once stories arose in Bosnia-Herzegovina that the film’s love story concerned a Serbian rapist and his Muslim captive, objections were raised by the association Women Victims of War, who accused the film of presenting “misleading history.”Their objections reportedly helped prompt Bosnia’s culture minister, Gavrilo Grahovac, to revoke Jolie’s permit to shoot in Sarajevo.Jolie, who serves as a United Nations High Commissioner of Refugees goodwill ambassador, reportedly contacted the women’s group through the UNHCR and said, “Don’t judge me before you see the film.”Jolie, 35, is also quoted as saying, “Obviously any dramatic interpretation will always fail those who have had a real experience. This is not a documentary.”She further advised, “There are many twists in the plot that address the sensitive nature of the relationship between the main characters, and that will be revealed once the film is released.”

Calling the situation with the permit “a purely technical matter,” the movie’s production company, GK Films, announced in a statement: “We are obliged to reapply for the permit to shoot Angelina Jolie’s directorial debut with the appropriate government offices in Sarajevo now that the final script is available.”The BBC also quotes GK Films as saying, “The stories about the film which have recently been circulated are incorrect – Cnn