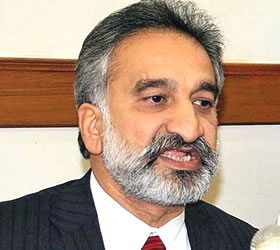 KARACHI: Sindh Home Minister, Dr. Zulfiqar Ali Mirza on Sunday called for cooperation of leaders of all the political parties to normalise the situation in the metropolis.The Provincial Home Minister was addressing a hurriedly called press conference at Sindh Chief Minister House here.Dr. Zulfiqar Mirza said total 25 people died and 40 were injured in recent incidents of violence in the metropolis.In recent violence more than 60 accused with diverse ethnicity, including some nominated accused, have been arrested from three zones of Karachi, he said.The Minister said we are taking action to arrest culprits with honesty and raids are being conducted on different leads in some areas of the city.He said unfortunately some sections of media are conveying news reports that an  operation is being conducted in the city.  Using the word “Operation” by media provokes peaceful people and creates doubt on the intentions of police and government, he added.
The Home Minister said recent violence in the city started after deaths of two people and investigation is underway in this regard.He said the by-election to  PS-94 of Orangi Town here has also completed peacefully. One political party  was unsatisfied with the arrangements of the government and it boycotted the polls.He said he is grief-stricken due to blood shed in the metropolis and we all are responsible for it.He said it would be easy for him to hold the foreign hands responsible for violence in the city but we are responsible to protect life and property of the people, he added.Dr. Zulfiqar Mirza said the Sindh Government, Provincial Home Department and Police do not have any such mechanism which can help them to arrest the culprits before occurrence of any incident.
He noted that the police and rangers apprehended total 53 accused of target killings in 2009-2010.
He said investigations into  the murder MQM leader, Dr. Imran Farooq is being conducted by a police of developed country and even after a  lapse of more than three weeks the probe is underway, then how  police of a developing country can draw any conclusion more quickly, he asked.He said proper investigations into various deaths in reported incidents of violence are underway and reasonable time be given to complete the same.
He said he will not hold any single party or group responsible for the violence because it is a collective responsibility to maintain peace in the city.To a question, he clarified that he never met or had any relations with Abdul Rehman alias “Rehman Dakait”.
He said any situation in Karachi  affects the economy of the country as it  contributes to  the economy’s  rise and fall and the same is the barometer  of a foreign investors in  making opinion about the economic  climate the country.Advisor to Sindh CM for Information, Ms. Sharmila Farooqi, Sindh Minister, Muhammad Rafiq Engineer and Special Assistant to Sindh CM, Waqar Mehdi were also present on the occasion – App