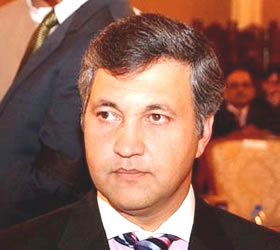 ISLAMABAD: The launching ceremony of 24 projects under Grassroots Initiative Programme (GIP) was held here on Thursday.The program is being implemented by Ministry of Environment in collaboration with One United Nations Joint Program on Environment.Federal Minister for Environment Hameedullah Jan Afridi was chief guest on the occasion.He said the environmental destruction was affecting everyone at global level and Pakistan also suffered its adverse impacts in the form of devastating floods.He said it was realized that the government should join hands with civil society to work on grassroots issues affecting the people.The UNDP Country Director Toshihiro Tanaka in his address said that his organization was committed to support government and civil society for the projects aimed at improving the lot of vulnerable segments of the society especially women.He said the role of media was crucial in highlighting these issues before the policy makers.He said the programmes would enable local community to have a voice in policy making on issues affecting them.In all, 24 grassroots NGOs were granted an average of $US 50, 000 each to launch innovative community based projects under the GRIP programme.As per details, the total cost of the programme is $US 1.2 million. The 24 NGOs have been selected after a careful scrutiny of over 450 proposals. The projects will be implemented in all four provinces besides Gilgit Baltistan and Azad Kashmir – Sananews

Hitachi, Johnson Controls to tie up in batteries

Hitachi, Johnson Controls to tie up in batteries