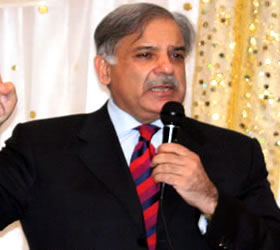 ISLAMABAD: Mian Shahbaz Sharif, Punjab Chief Minister, on Thursday made a telephone call to Prime Minister Syed Yusuf Raza Gilani and regretted the unsavory remarks uttered by some PML(N) leaders about Zulfiqar Ali Bhutto and ancestors.He also requested to convey this to the leadership of the Pakistan Peoples Party (PPP).It may be recalled that Prime Minister had expressed consternation over the remarks uttered by the leaders of Pakistan Muslim League-N (PML-N) about the founding Chairman of PPP Zulfiqar Ali Bhutto Shaheed.The Prime Minister had conveyed it to Mian Shahbaz Sharif when he met him at Muzaffargarh, where he addressed a public gathering alongwith Turkish Prime Minister.The Prime Minister emphasized that the federal government believed in the policy of reconciliation and stability of the democratic system.He said that politicians must show due deference and respect to the leaders of their parties and should not indulge in character assassination of one another.Mian Shahbaz Sharif assured the Prime Minister that he would inquire about the matter and appropriate steps would be taken to assuage the sentiments of PPP workers. He rang up the Prime Minister and expressed regret over such remarks by some PML(N) leaders – App