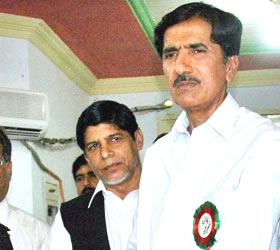 LAHORE (October 15 2010): Punjab Agriculture Minister, Malik Ahmad Ali Aulakh has said the Punjab government has announced a revolutionary package for the flood-affected growers. “Under this package wheat seed and fertilisers will be distributed free of cost among the growers of Mianwali, Bhakkar, Layyah, Muzaffargarh, Dera Ghazi Khan, Rajanpur and Rahim Yar Khan”‘ the minister said while talking to newsmen here on Thursday.He said that growers having 25 acres or less land would be facilitated under this package, but the seed and fertilisers would be provided for 12.5 acres of land. Special centres were being established in the province to meet the task. Growers would be provided 50 kilograms of seed and one bag of urea per acre from these centres.

Eligible growers have to come with their Computerised Identity Card (CNIC) to get free voucher, seed and fertilisers from these centres, the minister added. The minister claimed that lists of eligible growers had been prepared in a very transparent manner so as no one could be deprived. He made it clear that only those growers could take benefit of this programme whose name would be included in the list – Brecorder