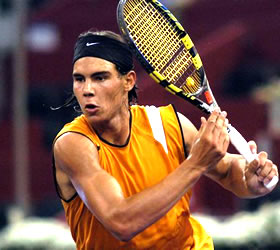 World number one Rafael Nadal has been knocked out of the Shanghai Masters after suffering a shock 6-1 3-6 6-3 defeat to Jurgen Melzer in the third round on Thursday.Nadal’s serve was broken twice in the opening set against the Austrian, who is ranked 12th in the world and will now play Argentina’s Juan Monaco in the quarterfinals.U.S. Open champion Nadal came into the tournament on the back of a title in Japan, having been upset in the semifinals in Thailand the week before.He now has a season record of 67 wins and nine defeats ahead of the Paris Masters and ATP Tour World Finals in London.”I felt slow on court. I had more mistakes than usual,” the 24-year-old Spaniard told reporters on Thursday. “I played shorter than usual. [I was] a little bit more tired than usual, just physically and mentally.”Melzer has an outside chance of playing in both the singles and doubles at the season-ending event in London, which would make him the first player to do so since Spain’s Emilio Sanchez in 1990.
“But it’s a long way there. I’m almost 900 points off the eighth player. This is a very long way,” the 1999 Wimbledon junior champion said.There are four places yet to be confirmed for the tournament, with Sweden’s Robin Soderling, Tomas Berdych of the Czech Republic, Spain’s David Ferrer and injured American Andy Roddick currently on course to claim the remaining berths.Third seed Roger Federer, who has already qualified for London, set up a quarterfinal clash with fifth seed Soderling after dispatching Andreas Seppi 6-3 6-4.The Swiss maestro faced several break-points in the opening set, but his Italian opponent was unable to take advantage and the 29-year-old progressed.Soderling reached the last eight on Thursday with a 7-5 6-4 win over 11th seed Ferrer.

World No. 4 Andy Murray advanced with a 6-3 6-4 victory over French qualifier Jeremy Chardy, ensuring his place in the eight-man ATP Tour World Finals in the process.Murray will play Jo-Wilfried Tsonga in the quarterfinals in Shanghai, after the French 12th seed beat Germany’s Florian Mayer 7-5 6-3.”It was a big match for me, because I knew I’d qualify for London if I won, the 23-year-old Murray told his official website.”I thought it was very good. I served well when I needed to, when I was down break points at the start of the match. My second serve I varied a lot, because he was trying to run round and hit his forehand.”Second seed Novak Djokovic, who won the China Open in Beijing last week, is also into the last eight in Shanghai after a 6-1 6-1 triumph over France’s Richard Gasquet.The world number two never looked threatened in the match, breaking Gasquet’s serve on five occasions and hitting 25 winners.The Serbian will next face Guillermo Garcia-Lopez, Nadal’s conqueror in Bangkok before winning the title.The in-form Spaniard dented world No. 7 Berdych’s end-of-season hopes with a 7-6 (7-4) 6-3 win over the Wimbledon runner-up, but has lost all three previous encounters with Djokovic – Cnn

Commonwealth Games come to a close on high note for India