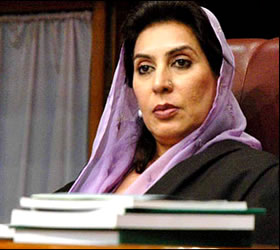 ISLAMABAD: Speaker of the National Assembly on Thursday stressed the need for evolving polices to ensure rights of rural women.She said this in her message on the occasion of International Rural Women’s being commemorated throughout the globe under the auspicious of United Nations on October 15.She said rural women were among the most vulnerable and marginalized segments of the society despite the fact they play a significant role in the rural economy.She said that rural women were also subject to violence, economic exploitation and lack of basic healthcare.The Speaker said that rural women comprise a major chunk of the population and play a significant role in agriculture sector rural development but their contribution were not recognized at any level.She said that with the advent of latest technology in the agriculture sector, the involvement of women had not been decreased and still have to perform extensive agriculture work.She said that the government should officially recognize their participation in national economy and devise policies to ensure their rights.
Dr. Fehmida Mirza said that women in our rural-cultural panorama were confined to household cores and laborious work in the fields and do not have access to education.
She said that education was an inalienable right of every individual; therefore, it was imperative to educate rural women to make them able to understand and face their diverse problems.She asked the government to allocate required funds for establishment of schools for females in the rural women.She said that women and children were most vulnerable in natural disasters and calamities. She added that rural women are currently in great miseries due to havoc played by the floods in different parts of the country.
The speaker said that majority of women in the rural areas have been displaced and have lost everything.She stressed the need for providing shelters, livelihood and medical assistance to rural women in affected areas on priority basis.
She asked the government to extend SME network to rural areas where enterprising rural women could have access to credit facilities to make them self-sustaining and economically empowered.
She also stressed the need to establish training and display centers at Tehsil level for rural women artisans so that they could get appropriate proceeds for their crafts and would also eliminate the role of middlemen who economically exploit rural women.
She called upon the Banking Sector to provide loans to rural women so that they could better contribute in national development.
Dr. Fehmida Mirza said it was the vision of Shaheed Mohtrama Benazir Bhutto to empower women so that they could contribute better to the national development.
She said that to accomplish the vision of Shaheed Mohtrama Benazir Bhutto the government has introduced several schemes for the uplift of the women in the country including Waseela Haq programme through which financial assistance provided to women for establishment of business so that they could earn livelihood for their families with dignity.She lauded the government’s decision to launch Benazir Income Support Programme to ward off the effect of inflation on the purchasing power of the poorer sections of the society – App