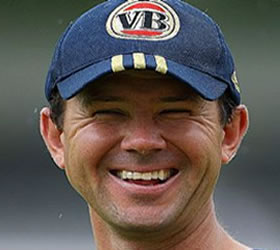 Of course, past performance is no guarantee of future returns. And rankings, to most players, are about as significant as over rates or inside-leg measurements.Yet, on this rare and special occasion, Andrew Strauss and company are likely to experience a pleasant glow of schadenfreude. The table has been running for seven years now, and this is the first time that England have been able to look down on their Ashes rivals.It was Sachin Tendulkar who administered the latest blow to Australia’s self-esteem, stroking an unbeaten half-century to seal India’s 2-0 series win. From the moment when Ponting was lbw to the excellent Zaheer Khan, late on Tuesday evening, the Bangalore Test had always looked to be heading India’s way.Their comfortable seven-wicket margin made it a routine victory by comparison with the last-ditch drama of Mohali, where Australian substitute fielder Steven Smith could have won the match with a direct hit from 15 yards.Wednesday’s result was another disappointment for Ponting, whose record as captain in India now stands at seven Tests, five defeats and two draws. Ironically, a broken thumb forced him out of most of the 2004 tour – the only time in the last 30 years when Australia have won a series there – and it was Adam Gilchrist who carried the Aussies over “the final frontier”.Speaking after the match, Ponting identified faults in every department of Australia’s cricket. Their batting, he said, should not have been brushed aside so easily in the second innings, while the seamers had failed to match Zaheer in the dark arts of reverse-swing.Most worryingly of all, Nathan Hauritz’s off-spin was spanked all over the place, yielding the alarming figures of 12-0-76-1. It was a bleak day for Hauritz, if not quite as grim as Bryce McGain’s one and only Test against South Africa, when the leg-spinner returned 18-2-149-0.

Australia’s failure to find a spinner with even a fraction of Shane Warne’s ability is the biggest single reason for Ashes optimism, especially when Graeme Swann seems to improve with each match.Yet Warne has sympathy for his successors’ plight. “How the hell can Hauritz bowl to this field?” he wrote on his Twitter page on Wednesday morning. “What are these tactics? Sorry Ricky but what are you doing?””Those are the fields [Hauritz] wants to bowl to,” a frustrated Ponting returned on Wednesday night. “Unfortunately, it doesn’t appear that Shane would take the time to ask anyone about that.”While the disagreement was relatively low-key, it may be symptomatic of growing disquiet in Australia about Ponting’s record as captain. On the two biggest tours – England and India – his tally stands at four defeats from four Test series.

With the exception of the Hauritz debate, this Test probably had less to say about Australia’s Ashes prospects than the last one. We already knew that they tend to struggle in subcontinental conditions, which are about as different from their own high-bouncing pitches as it is possible to get.What was new in Mohali was the mental frailty that allowed the Indians to recover from 124 for eight to overhaul a target of 216. In his playing days, Warne always used to say that the Poms would crumble under pressure. But on the evidence of last year’s denouement at the Brit Oval, it is now Ponting’s mob who are flaking out at key moments.Australia’s tumble down the rankings ladder began just over a year ago, with that seismic defeat in South London. Since then, they have dropped more points against Pakistan and now India.

But that’s where it will stop. Even in the unlikely event that England win the Ashes 5-0, Australia’s ranking cannot get any worse for years to come, as there is a big gap between the five major Test teams and the others who make up the numbers.Not that it is much consolation for a team who are used to lording it over all comers. Backdated records show that Australia have held an effective monopoly over Test cricket. If the rankings system had existed back between 1995 and 2009, they would have spent all but eight months at the top.There are few things in sport more fascinating than the decline of a dynasty. Now, as results fall away around him, Ponting finds himself cast in an unenviable role: the last emperor of Australian cricket  – Telegraph