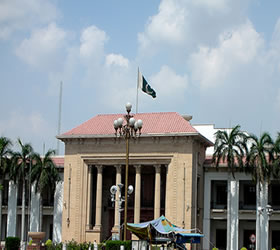 LAHORE (October 14 2010): Punjab Assembly on Wednesday passed Amendment in the Rules of Procedure of the Provincial Assembly of Punjab 1997. The Law Minister, Sana Ullah moved the proposed amendment in the Rules of Procedure of the Provincial Assembly regarding pre-budget discussion as recommended by standing committee on law& parliamentary affairs.The committee recommended the amendment in which it put forth that Minister of Law & Parliamentary Affairs in consultation with Finance Minister shall include in the list of business, the general discussion seeking proposals of the members for the next budget in session of the Assembly which is held during the months of January to March each year, adding that general discussion on budget proposals shall take place for at least four days during the session. The Assembly then may recommend the proposals to the government for the next budget on a resolution moved by the Finance Minister after the conclusion of the discussion.

Punjab Assembly in another development passed The Forest (Amendment) Bill 2010. The motion regarding this bill was presented by Law Minister Sana Ullah. The Bill while increasing the fines under 1927 Forest Act will improve the enforcement mechanism of the provisions of the Act and will lessen the burden on police as far as the investigation of the offence is concerned. The bill is likely to put on halt ever-shrinking forest area of Punjab, which is hardly 3.1 percent of the area of the province.

Punjab Auqaf Minister Ahsan-u-Din stated that there are 14 shrines and 16 mosques in Hazrat Mian Mir (RA) mausoleum circle. He said that annual income of the shrine of Madho Lal Hussain (RA) was Rs 2,91,700.The Minister said that it was correct that the State shall correct and exact printing and publishing of the Holy Quran. In the discussion the point was raised regarding burial of people in residences, in which minister promised to look into the matter. Sana Ullah on motion of kidnapping of Dr Abdullah on which agitation was going on by doctors stated that he was in the custody of law enforcement personnel, who were looking into allegations regarding him.

MPA Hassan Murtaza, referring to a senior member in DGM group, stated that he recently displayed certain harsh behaviour towards a Grade 19 PCS officer. The MPA said PCS cadre was respectable and should not be bulldozed by others of different cadre. The legislator staged walk-out from the Assembly. The Chair sent certain legislators to call him back.Another MPA referring to a legal report regarding murder of two brothers in Sialkot demanded that the Report be presented in the House. The House after dealing with certain motions was adjourned for 10 am on Thursday by the chair – Brecoder