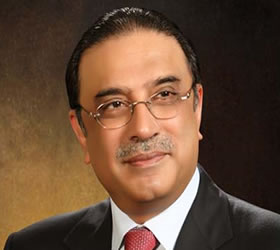 ISLAMABAD: President Asif Ali Zardari Wednesday called for upgradation of the Pak-Turkey rail link for increased trade and economic cooperation between the two countries.He was talking to Turkish Prime Minister Recep Tayyip Erdogan who called on him here at the Aiwan-e-Sadr.Briefing the media spokesman to the President Farhatullah Babar said the President reiterated the proposal of upgradation of railway line between the two countries and urged the Turkish Prime Minister to seriously consider the proposal.He said that Pakistan was eager to further enhance mutual cooperation between the two countries for taking maximum advantage of the existing potential of the two countries and to fully translate their equation into a strategic partnership.
He said that railway line upgradation project between the two countries was one such step for not only speedy transportation of the cargo but would also open new vistas of opportunities for the people and would contribute towards economic development.
The President said there was a need to urgently evaluate similar projects so as to move forward on vigorously pursuing the raising of finances.
The President also suggested a currency swap agreement between the two countries to facilitate business, trade and commerce.Babar said the President also felicitated Turkish Prime Minister on the vote for a series of democratic measures in the recently held referendum.He hailed the verdict on reform package as a triumph of democracy and democratic processes and recalled recent democratic reform in the shape of 18th Constitutional Amendment in Pakistan.
The President also appreciated Turkish Government’s generous assistance, both in cash and kind, for providing relief to flood-hit people of Pakistan and also its pledge to actively participate in reconstruction and rehabilitation activities for the flood affected people.
He said the government and people of Pakistan greatly value sensitivity and the support of the Turkish people and government at this hour of distress.
The President said both the countries need to aim at increasing their trade and investments equations and further cooperate especially in transport, telecommunications, manufacturing, tourism and other industries.
Discussing regional situation, the President said that Turkey has an important role to play for not only bringing in socio-economic development in the region but also for stability of the region. He said that regional issues can be addressed by regional powers and finding indigenous solutions.
Prime Minister Erdogan thanked the President for the warm welcome and said that Turkey would continue to support Pakistan and its people at every critical moment and would actively participate in the reconstruction and rehabilitation phase for the flood affected.He said that the Turkish government would consider the proposal of Currency Swap Agreement – App