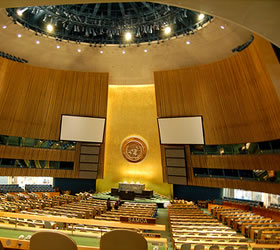 UNITED NATIONS (October 14 2010): Pakistan has called for facilitating cross-border e-commerce with global on-line dispute-resolution mechanisms as part of steps to expand international trade on the basis of mutual benefit. “We want to underline that the debate on the online dispute resolution system must take into account the digital divide in the world,” Abdul Hameed, the Pakistani delegate, told the General Assembly (GA) legal committee on Wednesday.Speaking in a debate on report of the United Nations Commission on International Trade Law (UNCITRAL), he said, “The views of developing countries on modalities of online dispute resolution mechanism need to be heard carefully in the debate on this issue.The Pakistani delegate said international trade for mutual benefit was an important element in promoting friendly relations among States. There was a strong link between the harmonising of international trade law, legislative work and development, he said. The technical co-operation and assistance activities provided to developing countries since the Commission last session were welcome – Brecoder