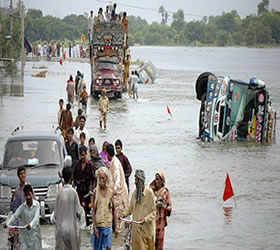 KARACHI: Pakistan’s recent floods inflicted $9.5 billion in damage to property, crops and infrastructure, according to an Asian Development Bank and World Bank assessment, Finance Ministry officials said on Wednesday.Aside from trying to cope with that direct damage, the government may face total recovery costs of $30 billion, Finance Ministry officials said, although they had not seen the report.If that figure proves correct, it will likely disappoint the government, which had estimated damage at $43 billion and needs all the aid it can secure.The floods, which began in late July, left more than 10 million people homeless and affected 20 million, and devastated an economy that was already fragile before one of the country’s worst natural disasters.
The first challenge will be dealing with $9.5 billion in direct damage one of the ministry officials said was reported in the assessment, due to be presented at a Friends of Democratic Pakistan meeting in Brussels on Thursday.
The cost of rehabilitation will likely push the 2010/11 fiscal deficit to between 6 and 7 percent of the gross domestic product against an original target of 4 percent.
Asad Iqbal, chief investment officer at Faysal Asset Management Ltd, said while reconstruction may stimulate the economy, much will depend on the mode of funding.
“If it’s borrowed money, then rebuilding that creates a higher deficit will, of course, cause inflation to rise further and the common man is likely to see delayed benefits,” he said.“But if the rebuilding is funded by foreign grants or soft loans plus government resources, then that would result in a quicker impact on the economy – Sananews