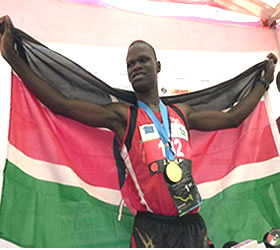 NEW DELHI: Kenya’s John Kelai won the men’s Commonwealth Games marathon gold medal on Thursday, crossing the line in 2:14.35.Australia’s Michael Shelley took the silver some 53 seconds behind and another Kenyan, Amos Matui, claimed the bronze.In hot and humid conditions, it was Kenya’s first Commonwealth marathon victory in 20 years and rounded off a superb Games for their athletics team.The big and strong Kelai took control of the race with around 25 minutes to go when he made his move with a subtle increase in pace that took him away from the field.

Looking relaxed and controlled, he built on his lead to comfortably win the race.The battle for second was far more interesting with Matui, Tanzanian defending champion Samson Ramadhani and Namibian Reinhold Iita switching positions as they battled for position.

But Ramadhani and Iita did too much too soon and they slowed considerably to let Shelley back into contention with two kilometres to go and the fight was then on between him and Matui for silver.Shelley eventually triumphed with a smart, tactical run – Timesofindia

Commonwealth Games 'a metaphor' for investing in India