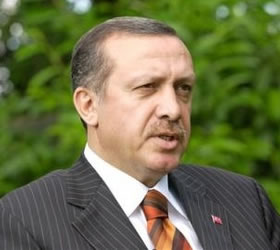 THATTA:Turkish Prime Minister Recep Tayyip Erdogan has said that hidden forces are behind all the terrorist activities in the region.Addressing a gathering here at Makli in Thatta district after visiting flood relief camps on Wednesday, he said that Turkey is deeply concerned about the incidents of terrorism in Pakistan.“Today Pakistan, Afghanistan, Iran and Turkey are targets of terrorism and we need joint efforts to tackle the problem of terrorism,” he said.The Turkish Prime Minister said that those involved in acts of terrorism could not be the followers of Islam as our religion preaches peace and brotherhood.“Ours is the religion of peace and teaches protecting  the  life of people but today we see people indulged in killing of innocent masses and I don’t think they are Muslims,” he said.
Erdogan appealed  to the people of Pakistan, Afghanistan, Iran and Turkey not to to be a part of any conspiracy and prevent from indulging in any act of terrorism if they consider themselves as Muslims and added that Turkey was facing the menace of terrorism for last three decades.“Once we overcome the problem, Pakistan and neighbouring countries like Afghanistan and Iran will emerge stronger in the region and we need joint efforts in this regard,” Erdogan said.Referring to the flood relief efforts in Pakistan, the Turkish Prime Minister said that Turkey is doing its best to establish full fledged and permanent hospitals and schools which will replace the existing field hospitals being run by us in flood and earthquake affected areas of Pakistan.
“We are here on behalf of the people of Turkey to practically solve the problems of the people facing natural disaster,” Erdogan said .He also referred to the earthquake of some years back in Turkey and hailed the assistance offered  by the  then government of Pakistan.
“People of Turkey and Pakistan have time-tested friendship and both have indeed extended the support to their brothers in need,”  Erdogan said.The Turkish Prime Minister said that his ministry of religious affairs also facilitated in a campaign to raise funds for the flood victims of Pakistan. Besides,  the Turkish Red Crescent Society, labour unions and chambers of commerce also played a very influential role in this regard.
“I am not alone, the whole nation is with the people of Pakistan,” he said.
Referring to rehabilitation of the 2005 earthquake victims of Azad Kashmir,  Erdogan said that his government plans to play an active role in building of housing societies in the flood-hit areas and assured that practical measures will taken  to rebuild the houses of flood victims in all areas.Earlier, the Prime Minister Syed Yusuf Raza Gilani appreciated the assistance provided by the Turkish government to the people of Pakistan.
Gilani thanked the Turkish PM, his wife and daughter for their continued support to the people of Pakistan during natural disasters like flood and earthquakes.
The Prime Minister said that the Pakistan Peoples Party(PPP) enjoys support of the masses and it would play its active role to keep the federation intact.“Bhutto family and party leadership led by shaheed Zulfikar Ali Bhutto, Shaheed Mohtarma Benazir Bhutto laid their lives  for the unity and democracy of Pakistan,” he said and added the Sindh province always played a pivotal role for the democracy.The gathering was also addressed by Sindh Chief Minister Syed Qaim Ali Shah. The provincial ministers were also present on the occasion – App