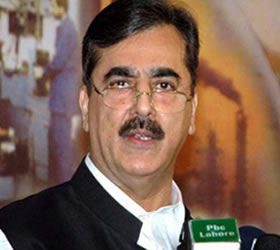 MEHMOOD KOT, (Muzaffargarh): Prime Minister Syed Yusuf Raza Gilani and his Turkish counterpart Recep Tayyip Erdogan on Wednesday vowed to join hands towards making their countries stronger to better face international and regional challenges.Turkish prime minister Erdogan who along with Prime minister Gilani visited the flood-affected area of Mehmood Kot in district Muzaffargarh, said their joint efforts could make a lasting impact on the lives of people.“Pakistan and Turkey need to move forward with hands in hands and work towards building – stronger Pakistan and stronger Turkey,” the Turkish prime minister said while addressing at a ceremony to distribute keys of houses to the flood victims.Erdogan said Turkey would not leave their Pakistani brethren in challenging times after the country was hit by century’s worst floods.
He said his visit aimed at fulfilling his responsibility as a brother to help Pakistan in trying times. He mentioned the contribution of Turkish Red Crescent for actively carrying out relief and rehabilitation activities not only in flood-hit areas but also previously in the earthquake ravaged parts.He said his wife and daughter had earlier visited Pakistan to help the flood victims, but he could not manage due to referendum in Turkey.Prime Minister Gilani thanked the Turkish prime minister for visiting Pakistan and providing assistance to the flood affected people.The Prime Minister said the government would provide houses to the 20 million flood affected people.
He said Pakistan and Turkey can jointly collaborate in defence, trade, telecom and agriculture sectors. He said Turkey comes second in construction sector, adding that Turkish builders could play an important role in the flood-hit areas.
He mentioned the visit of Turkish first lady to Pakistan’s flood-affected areas who shared the grief of victims, and even sold her necklace to collect donations.
Prime Minister Gilani also appreciated the Turkish Red Crescent for actively participating in relief and rehabilitation activities.
He stressed for further collaboration on national strategies between Pakistan and Turkey, and said Pakistan would attend the trilateral meeting in December in Turkey.
The Prime Minister urged the Commerce Chambers of the two countries to achieve the target of collecting two billion dollars for flood affectees.
He suggested for opening branches of Turkish banks in Pakistan.
Gilani lauded the principle stance of Turkey seeking Israel’s apology on the Freedom Flotilla killings and said Pakistan also stood by Turkey.He referred to the political developments in Turkey and congratulated Erdogan on successful referendum.
Erdogan called for the two countries’ collaboration in various sectors including defence, trade and construction.He said the hearts of Turkish people beat with their Pakistani brethren as they cherish mutual history, civilization and culture.
He said there was a need to develop infrastructure besides reconstructing schools and hospitals in the flood-affected areas.He said Turkey would continue installing pre-fabricated structures in different parts of the country.
He recalled Pakistan’s support in Turkey’s independence war and during the 1999 earthquake in Turkey, and Turkey would not forget the assistance provided in difficult times.
He urged the Pakistanis to develop unity amongst them and not allow the terrorist elements to surface. He said Pakistan’s instability could please many in the international world.
Erdogan mentioned the atrocities of Israeli soldiers on Turkish passengers at Freedom Flotilla vessel and said the United States wrongly favoured Israel. He called for Israel’s apology over the incident.
Chief Minister Shahbaz Sharif in his speech thanked the Turkish prime minister for visiting Pakistan and showing interest in providing assistance to the flood victims.
The ceremony was attended by Interior minister Rehman Malik, Information minister Qamar Zaman Kaira, Education minister Sardar Aseff Ahmed Ali, Minister of State for Economic Affairs Hina Rabbani Khar who also accompanied the two prime ministers during their visit to flood affected areas – App