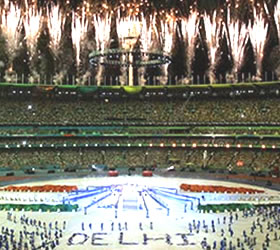 NEW DELHI: Delhi’s celebration will reach a crescendo at the Jawaharlal Nehru Stadium on Thursday as the XIX Commonwealth Games flag comes down to begin its journey to Glasgow for the next meet in 2014.The 2-hour-15-minute show featuring 7,000 performers from all over the country, who trained hard for 25 days, will spread the message of universal love as the athletes from participating nations and territories march out as a one big family after 11 days of exhilarating action.”The closing ceremony is divided into five broad segments starting with Agni that will showcase all the martial arts that originated in India.Next on stage, enthralling the capacity crowd of 60,000 lucky spectators and millions around the globe, will be the Military Martial music, a segment which will remind the Delhiites of the ‘Beating the Retreat’ after the Republic Day celebrations. It will be followed by the ‘Tribute to the Motherland’.This segment will have 2010 school children performing the revival – a specially composed version of the Vande Mataram by AR Rahman,” informed sources told TOI after the final rehearsal.

Then it will be the turn of Scots to invite the world to Glasgow in 2014. “This is a small segment showcasing the next host city and involves the traditional bagpipers and dancers,” the sources said.The grand finale will be a blast of music. “It will be a big pop party comprising 35 minutes of non-stop sound with 29 of India’s top singers performing. The array of star singers include Usha Uthup, Shankar Mahadevan, Shaan, Sunidhi Chauhan and Kailash Kher.

The riveting show, which also has a spectacular laser display, is produced by Viraf Sarkari for Wizcraft International Limited and choreographed by Shiamik Davar, Santosh Shetty and Devendra Shelar. Bharat Bala is the creative consultant. The costumes, numbering around 2,500, were designed by Anna Singh, Ashima and Leena.The core creative group for the mega show comprises renowned film personalities Shyam Benegal, Javed Akhtar and Prasoon Joshi – Timesofindia