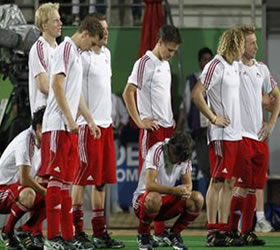 England battled their way back from 3-1 down in normal time to force the extra period with a hat-trick from Simon Mantell, but when it came to the shoot-out the New Zealanders came out on top.Adam Dixon saw England’s third penalty saved by Kyle Pontifex and that proved to be the difference. It was the second consecutive defeat on penalties for England, who had lost their semi-final against India in the same fashion.
New Zealand started the stronger with Shea McAleese forcing a fine save out of James Fair in the eighth minute, but a minute later Dean Couzins put the Kiwis in the lead from a penalty stroke.

England recovered well and almost equalised two minutes later when Glenn Kirkham’s effort was saved by Pontifex and Ashley Jackson rammed the rebound into New Zealand captain Phil Burrows on the post.But England’s attacks were few and far between and New Zealand went further ahead in the 15th minute when Nick Haig rounded off a sweeping move to fire home from the right side of the area.New Zealand twice missed the chance to further increase their advantage from penalty corners and paid the price when England reduced the deficit, James Tindall helping a Mantell cross over the line.Jackson had a penalty corner saved by Pontifex early in the second half, while at the other end Fair pulled off a similar save to block Andrew Hayward’s set-piece.

New Zealand extended their lead early in the second half when Fair illegally blocked Hugo Inglis cutting into the box, Hayden Shaw sweeping home the resulting penalty stroke.Dixon and Jackson both missed the chance to reduce the deficit from penalty corners before England got a temporary advantage when Steve Edwards was yellow-carded for a foul on England captain Barry Middleton.England took full advantage, reducing the deficit when Mantell flicked home a low ball into the box before completing his hat-trick by sweeping low past Pontifex.Heading into golden goal extra-time, the Kiwis got the first chance when Simon Child’s ball into the box struck the foot of Glenn Kirkham and earned a penalty corner, but the shot was saved by Fair.England got their chance from a penalty corner at the end of the first period but Richard Mantell saw his effort blocked on the line – Telegraph