World Cup is near so no experiments should be done: Afridi 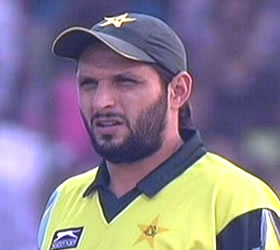 ISLAMABAD: Captain of Pakistan cricket team Shahid Khan Afridi has said that World Cup is approaching and matches to be played before World Cup are important so no experiments should be done.According to a private TV channel, he said “the committee should make a pool of 20 to 22 players for the World Cup so that I can give them a proper run during the series against South Africa and New Zealand.”He also said that National T20 tournament will be helpful for series to be played against South Africa, adding the success in this tournament will give world a message that International cricket can return to Pakistan. Afridi said that Pakistani team will give its best performance in the series against South Africa

Author hurls his book onto Obama in a rally

Author hurls his book onto Obama in a rally