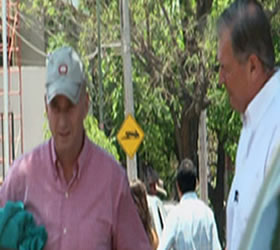 The Canadian Press has learned that a Canada-wide warrant for convicted sex offender Graham James will be issued Wednesday, based on new allegations from multiple complainants.Police in Winnipeg will lay new charges against the former junior hockey coach, who previously pleaded guilty to hundreds of incidents of sexual assault involving two teenaged hockey players under his influence.A tell-all autobiography published last year by former NHL star Theoren Fleury contains new allegations against James, who coached Fleury and fellow NHLer Sheldon Kennedy when they were young teens in Saskatchewan.Fleury said late Tuesday he was relieved to learn an arrest warrant will be issued for his former coach.”I’m grateful to the Winnipeg Police for responding to my complaint,” said a statement posted on Fleury’s website. “I know it took a while, but these things have to be done right.”Kennedy and another unnamed individual went to police in 1996, resulting in James’ guilty plea.”When they [police] did my investigation they said there were probably 75 to 100 victims out there — which I believe to be true,” Kennedy said in an interview Tuesday night.

“To me, abuse kills. You can’t take what Graham did lightly.”James, 58, has since been pardoned of those convictions and is believed to be living in Guadalajara, Mexico.As part of a joint investigation, CBC News and the Globe and Mail tracked James down in Guadalajara in May.He said at the time that he is not in hiding and has a Winnipeg lawyer to deal with any further allegations of sexual misconduct.
The lawyer, Evan Roitenberg, told The Canadian Press on Tuesday he was unaware of any new developments in the case. James was sentenced to three and a half years in prison in 1997 and later was revealed by The Canadian Press to have received a pardon from the National Parole Board. The news of his pardon prompted the federal government last spring to tighten the laws governing pardons.

Fleury’s autobiography, Playing With Fire, alleges James began molesting him when he was 14. But James’ assaults on teenaged underlings weren’t publicly outed until a decade later, when Kennedy and another unnamed individual went to police.By then, James was coach, GM and part owner of the Calgary Hitmen of the Western Hockey League.The scandal rocked Canadian hockey from its peewee rinks to the NHL. James was banned for life from coaching by the Canadian Hockey Association but subsequently turned up coaching in Spain from 2001 to 2003 – Cbc