Everyone can fly with Miss Thailand 2005 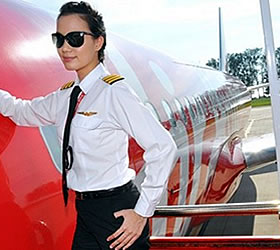 The first plane that Air Asia  pilot Chananporn Rosjan — or Nod –- ever flew solo was a Cessna 176, a single engine prop plane. She describes the flight as the most terrifying event of her life.“We were still at Don Muang Airport. A thunderstorm was coming in, it was turbulent. I had a trainer with me who would jump in if I ran into problems — but he never did.”Despite her initial fears, Nod went on to pass every exam and obstacle the pilot training program put in her way. One of just five women in a graduating class of over 30, today she’s among the few female pilots working in Asia’s male-dominated airline industries.But what makes Nod’s story really interesting is that in addition to holding the title of “captain,” she’s also a former beauty pageant queen. In 2005, Nod was crowned Miss Thailand Universe, taking part in the Miss Universe pageant alongside Canadian winner and now Bangkok-based celebrity Natalie Glebova.

But being Miss Thailand didn’t exactly help the Thammasat University graduate with her career ambitions.“There were a lot of expectations that I would be very effeminate or act a certain way because I was a beauty queen.”They couldn’t have been more wrong. The self-confessed tomboy was once even asked by her flight instructors if she could improve her appearance after appearing at school one too many times wearing slacks and no make up.

Growing up in Bangkok and New York, Nod admits she was always more into sports and athletics volleyball and basketball were her thing — than girly toys. She did have Barbie dolls but says she would pit them in ‘battle royales’ against her brother’s action figures.

“But I also loved Broadway plays, and I got into theater in high school,” she says.

Did she ever play a man?

Many of the women who are crowned Miss Thailand end up capitalizing on their fame by going into the entertainment industry after their pageant queen commitments are over. But Nod says she always knew her future would take her somewhere else.For one, she was always obsessed with airplanes. Her mother was a flight attendent so Nod was 10 when she first got to see inside a cockpit. However her parents advised her to pursue another career, knowing the pilot industry to be a patriarchal arena. As a result she chose to study electrical engineering at Thammasat University, with a view of one day becoming an aerospace engineer.

She only found out about Air Asia’s pilot training program through some guy friends. She went along with them to the entrance exam at their insistence and was the only one that passed.But defying expectations has always been the norm for Nod. She is the girl next door that beat you at all the sports, who grew up to become the gorgeous, intelligent woman who still beats you at all the sports.

In 2006, Nod received her official Air Asia pilot wings. Today she flies both domestic and regional routes, and says she’ll likely be working on Air Asia’s newest route, direct flights from Bangkok to India, which began this week.I am very thankful. I know I am really lucky that the opportunities came along when they did. Everything has been a really rewarding experience – Cnngo

Kim Kardashian takes it (all) off for W magazine