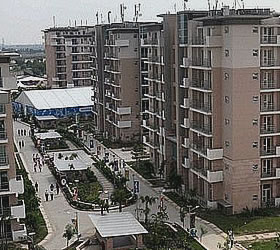 NEW DELHI: The atmosphere at the Commonwealth Games Village was filled with nostalgic feelings, just one day before the sporting extravaganza comes to an end.Having spent about a fortnight together, it is time for over 7,000 athletes to bid good bye to each other.While a few have already flown out to their respective countries, others are busy packing up.Most of the athletes had tears welled up in their eyes as they interacted with sports persons of other nations at the Village, which has acted as the cultural and social milieu for them.” India is really great. For the first time I come to know that you guys have such a rich culture and tradition. I am really going to miss it all,” said Jonathan, an athlete from the Isle of Man.For Kastro, an athlete from Bahamas, “The stay was something to cherish for lifelong. I did not know that I would make such good friends here. I had a wonderful stay here and also a little pain in my heart for leaving such a nice place.”There were many athletes and international delegates who were sad to leave this place after the Games.”I visited Agra and Jaipur during my stay here. I got a chance to understand your country. I must say it is awesome. The food is superb. I have also bought a cookery book to improve my wife’s culinary skills,” said an athlete from the Norfolk Islands.Be it saree, kurta pyjama and other Indian souvenirs, all were being bought in record numbers from merchandise and handicraft stores.

“Due to my hectic competitions schedule and hot weather I could not go out for shopping. But I have purchased sarees and some other items for my friends and relatives,” said Rashique, athlete from Bangladesh.The Games Village saw an amalgamation of people drawn from different caste, creed, sex, region and religion from 71 countries.Interestingly, there were not many athletes practicing on Wednesday in the training area.”Almost all the competitions have ended. I thought of spending some time with my friends in the Canada and England teams rather than exercising. After reaching home, I have to do the same old monotonous work. Let me give myself a chance to rejuvenate and happy for one more day,” said Jonathan, an athlete from Bermuda.

For many, the grand dining hall proved to be a place for socializing and interacting with many others. “I made most of my friends while eating at the dining table. The food was awesome and I thank all for organizing such a good Games,” said an athlete from South Africa.The dining hall inside the Village can serve about 2,300 people at a time.The Games Village spread over in 63.5 hectares area houses a total of 34 residential towers, with 1,168 apartments comprising 4,008 bedrooms to house the athletes and team officials.

Besides, it has a bar, discotheques, restaurants, games parlor, internet café, a flower shop and a handloom store, among others.The Games, which was marred by controversies like corruption, shoddy construction work and filthiness, got a thumbs up from a number of athletes.”I would say it was really a superb Games. I enjoyed a lot. Forget the controversies, that is administrative issue, as a sportsman I liked all the things,” said a Pakistani athlete, on condition of anonymity as he was not authorized to talk to media.

Athletes and international delegates became friends with security personnel and volunteers posted here for assistance.”Policemen here are so friendly. Though I was a little irritated over the repeated security checks and frisking at all the gates, but later I started enjoying it,” said Jemima, a Kenyan athlete.

Over one lakh policemen have been deployed to carry out security jobs at Games Village and competition venues across the national capital.The 12-day long event featuring 17 sports disciplines will conclude on Thursday with a colourful closing ceremony at the showpiece Jawaharlal Nehru Stadium.
“We have delivered wonderful Games. I am confident that athletes and visitors must have enjoyed their stay here. We created a world class infrastructure and gave them classic services. I am a happy and relieved man now,” said Mayor of the Village, Dalbir Singh – Timesofindia