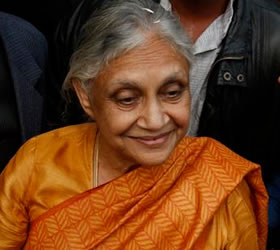 Even at 62, Usha Uthup  gets a crowd of thousands moving. Such was the case at the ongoing Qutub Festival in the capital. “Hari Om Hari” and “Ab Ke Saawan” were two of the most demanded songs. As chief minister Sheila Dikshit was at the performance too.A SENSE OF EUPHORIA: Nobody wanted to sit for Euphoria’s concert and neither could we hear much from Palash Sen this time. That’s because everyone stood on their chairs to cheer for the band. As the Qutub festival celebrates the Commonwealth Games being held in Delhi, how could the band leave without crooning the games anthem? So they invited Sheila Dikshit, Rina Ray, Sindhu Mishra, secretary, Sahitya Kala Parishad, and Rawail Singh on the stage. Sen joked, “Sheilaji, apko aana hi padega. Rinaji, aa jao na, hum itne bure log nahin hain.” The CM read out the part she has sung for “Dilli Meri Jaan” from a paper, giving way to the loudest cheer from the crowd, after which the band took on or should we say the crowd took on. Many from the audience stepped onto the stage to dance along. Security guards and policemen had to fight hard to get them off. Euphoria ended the show, saying, “Agar zindagi rahi aur agar… err… yeh security guards aage se hath jayein, toh phir milenge. Jai Mata Di.” Kavita Sheth also performed at Qutub a couple of days ago. “Iktara” from “Wake Up Sid”, got the dilliwallas going crazy, the trio – Hariharan, Sivamani and Louis Banks came on stage and got the crowd on their feet. Hariharan even made the crowd sing a few notes along with himself

MJ’s kids open up to Oprah