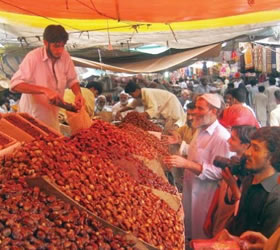 ISLAMABAD (October 12 2010): Food inflation rose to 21.24 percent in September, 2010 over the same period of last year on the back of steep increase in the prices of perishable items following floods. Official figures of monthly Consumer Price Indicators (CPI) released by the Federal Bureau of Statistics (FBS) on Monday showed an increase of 53.86 percent in the price of perishable food items and 16.04 percent in non-perishable food items that is feared to propel more people below the poverty line.The average CPI inflation for July-September 2009-10 rose to 13.77 percent over the same period of last year and SPI and WPI by 16.24 and 19.873 percent, respectively. Analysts said fiscal and monetary policies need to be in tandem to tame the inflation. This, they said, remains to be seen as to how effective the recently raised interest rate by the State Bank of Pakistan would be in the case of cost-push inflation. The monetary policy is an effective tool in the case of demand push inflation, they added.

According to analysts, the few measures government must take to tame the inflation are; fiscal discipline, steps to improve transportation mechanism hampered due to floods and tackling of structural issues in the economy such as hoarding, cartelisation and profiteering. The supply side could be improved, in the medium term, by giving incentives to farmers. The impact of 2 percent increase in the power tariff would be reflected in the next month CPI.Analysis of the data showed that cost of apparel, textile & footwear increased by 10.11 percent in September 2010 over the same period last year, house rent 7.62 percent, Fuel and lighting, 20.81 percent, household, furniture & equipment etc 8.74 percent, transport & Communication 15.55 percent, recreation & entertainment 14.43 percent, education 6.54 percent, cleaning, laundry & personal appearance 9.99 percent and medicare 12.47 percent.

Import of one million bales of cotton: traders finalise deals with Indian exporters

Import of one million bales of cotton: traders finalise deals with Indian exporters